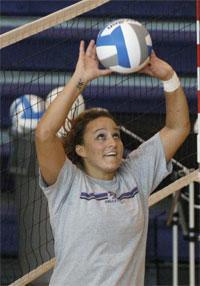 The women’s volleyball team will return to the court Saturday night following two seasons that have produced more than 40 wins.This year’s team includes 16 freshmen and sophomores and only four seniors and seven juniors.

“It’s always a positive to have young players,” head coach Prentice Lewis said. “You would like to have seasoned players, but in the future we are pretty promising.”

Estep, who is going into her fourth season, has played in all the Conference USA matches and her .270 attack average is currently eighth in Horned Frog history.

Harmon is in her fourth and last season with the Frogs and is tied for 15th all-time at TCU for blocks with 82.

We hope that both of them stay healthy and are able to give us some good numbers,” Lewis said.

Harmon stressed the need for TCU’s veterans to step up.

“Being seniors and being older, we’re going to have to be leaders, as well as the juniors,” she said.

Of the 16 underclassmen on the roster, half are freshmen.

“The upperclassmen are really good team leaders, and I am just trying to follow in their footsteps,” said freshman setter Nirelle Hampton from Gainsville, Fla., who won two high school state titles.

In 13 C-USA matches last season, the Frogs came away with 10 wins; this season the team switches to the Mountain West Conference, which has five teams that finished 2004 with double-digit wins.

“It’s going to be really tough. There’s three teams in the top 25 that we haven’t really faced before,” Lewis said.

The Frogs will head to Salt Lake City to face Utah in its first MWC match Sept. 30.

Lewis said she does not know what to expect as far as competition is concerned in the MWC and will not be able to pass judgment until conference play starts.

TCU will take on the Oklahoma Sooners in the University Recreation Center at 7 p.m. Saturday in their first non-conference regular season match.