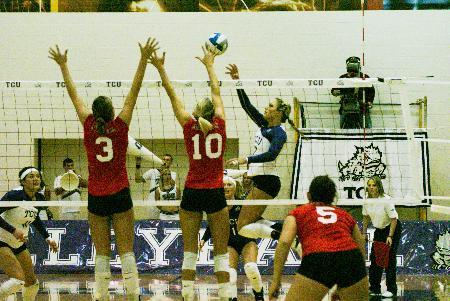 For the first time ever, a Horned Frog volleyball match was televised Thursday night.

Junior defensive specialist Katelyn Blackwood said her team came out excited to play in its first TV game but couldn’t do anything with that excitement.

“We came out down two, we were really excited about the white out and we didn’t turn that excitement into focus,” Blackwood said. “We got real excited real pumped up, but it wasn’t focused energy.”

Senior setter Nirelle Hampton agreed with Blackwood that the team came out with a lack of focus.

“We were just really tense and really tight,” Hampton said. “We tried to relax, come out and get the team settled down, but it just took to long.”

The last time these two teams met, Sept. 27, the Horned Frogs swept the Aztecs (25-14, 25-23, 25-23), but Lewis said this is a different team then the one they faced last month because they put in a freshman outside hitter.

That new player was Kyley Sexton, who recorded 14 kills in the match.

Hampton said this game will serve as a wake up call for the team.

“We have been struggling in practice,” Hampton said. “We know we are going to have to pick it up going into the second round of conference.”

The lone bright spot of Thursday’s match was the 1,036 fans, a new attendance record..

Lewis said Saturday’s match against UNLV is a must-win, and another record-setting crowd would really help the Frogs.

“The crowd was phenomenal,” Lewis said. “If we had crowds like this every time, I couldn’t see us losing a match.”