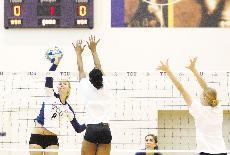 It’s one thing to have potential. The volleyball team says it’s a different thing to live up to that potential.

Prentice Lewis, who is entering her eighth season as head coach, said the word “potential” is the team’s motto for the season.

“Everybody’s always told us, ‘You have so much potential,'” Lewis said. “I said, ‘Well, that’s just a big word.’ You’ve got to prove potential.”

With 11 returning letter winners and five returning starters, the team has plenty of potential to live up to this season.

Lewis acknowledged that the team had to readjust after the loss of leaders Nirelle Hampton and Devon Kirk, who posed two consistent offensive threats for the team. But Hampton said senior middle blocker Kourtney Edwards, senior libero Katelyn Blackwood and senior outside hitter Lauren Otto are ready to lead.

“(Edwards) … is a solid lead-by-example kind of player,” Hampton said. “Otto and (Blackwood) both have really good leadership qualities and are both really loud and talkative and play with passion.”

Edwards is 48 blocks away from becoming the university’s all-time blocks leader, and Otto led the team in kills last season, averaging 2.94 kills per game. Otto did not participate in the annual alumni match Aug. 22, but Lewis said she hopes she will be back on the court this week.

Blackwood and junior right-side hitter Christy Hudson have been named to the preseason all-conference team. Blackwood said she knows the bar has been set high for her and the Horned Frogs.

“Everybody thinks we have this great potential, and we want to be more than just potential,” Blackwood said. “We want to prove it to them.”

Sophomore Megan Munce will take over as setter for Hampton, who is the school’s all-time assist leader. Although she started only 11 times during her freshman year, Hampton and Lewis said Munce has improved since last season and appears ready for the year.

Lewis said the team has an advantage over its competition this season because it played in several countries during a 10-day European tour in June. The trip enabled the team to train for a month when teams not participating in the tour could not, she said.

In addition to the extra training, Blackwood said the trip brought the players together and got them fired up for the season.

“We did really well over there, and we knew it was just going to carry on to the season,” Blackwood said.

The team is scheduled to kick off its attempt at a third consecutive winning season against Arkansas on Friday at 7 p.m. in the University Recreation Center.