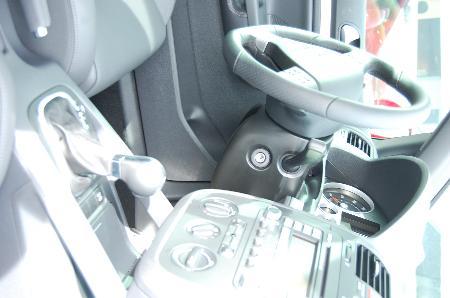 Volkswagen’s MkV GTI has been out for sometime now, and after winning many awards, it is now about to be phased out for the upcoming GTI MkVI. So now is the last chance to go and pick one up.

As almost any car enthusiast will tell you, there is no better way to be involved in the driving experience than by slamming that left leg down on a third pedal.

However, what I can say is that if you are looking for the best performance out of the GTI, the Direct-Shift Gearbox is impossible to beat. I can tell you that if it wasn’t so brilliant, I would have opted for the good six-speed manual. It’s essentially the same system used on the multimillion dollar Bugatti Veyron and can turn any back road smash into a Formula One-esque time trial. Then of course when traffic hits, you can throw the computer-controlled twin-clutch manual transmission into drive and just relax. But does the automated manual detract from the joys of driving?

The answer to that is only slightly. VW has accounted for some of this in their design. The GTI’s steering wheel paddles are quite small, as if trying to hide the fact they are even there. It would be much more satisfying to slap a larger paddle and then .02 of a second later hear that burp from the exhaust as you upshift.

The secret of the GTI is it’s not really the best at any one thing. If you want the quickest sport compact, the 2009 Mazdaspeed3, 2009 Turbocharged Chevrolet Cobalt SS Coupe or the slightly more expensive 2009 Subaru WRX are your choices.

This does not mean the GTI is a slow car. With the optional DSG gearbox and its launch control feature, it will do 0 to 60 in far less time than the manufacturer-rated 6.9 seconds. Several magazines have done 0 to 60 runs under this time, with Car and Driver Magazine posting the quickest time at six seconds flat.

To help performance, the car could use a limited slip differential which would reduce the wheel spin generated by the torque-crazed engine. However, around a track or back road, you will really see where the car shines. The driver always has the power and control that he or she wants, and even with this performance you will still be able to push out 30 miles per gallon on the highway.

In terms of handling, the GTI is not the best in its class for pure track performance but offers a spirited driving performance. Unlike the Honda Civic Si, which stays flatter through the turns, the GTI will have a slight amount of body roll, but only just so to remind you that, yes, you are entering a turn very quickly and perhaps you should pay attention. Not that you will crash or anything. Lift off the throttle and the front will tuck in nice and tidy.

Enough with me rambling on about performance, let’s look at the interior and functionality. The GTI, because it is just a performance version of the Rabbit (or Golf), also sports the most usable body shape of its competition. With its folding rear seats, it can easily carry almost anything you would want it to, and with the seats up it will still easily fit your six-foot-five-inch car salesperson and a dog all at the same time.

It is impossible to notice that the interior feels far nicer than the car’s price. Some have even complained that it feels too much like an Audi. The interior has a robust quality to it with its high-grade plastics and inlays.

Unlike the interior, the exterior of the car is a love it or hate it routine. With its retro-themed accents, the honeycomb grill and red grill stripe it does look quite poised and aggressive. Like most hatchbacks, photos do not do any justice to the shape and lines, so look at it in person before you judge it.

Overall, the MkV GTI is worthy of every award it’s won and then some more piled on top of that. It may not be a car for everyone’s taste, but it is certainly worth a test drive if you are in the market for a sport compact. With its expensive feel and overall quality in every category it’s hard to ignore this jack of all trades.

Final Thoughts: Every time I step into my GTI, it never fails to put a smile on my face. Whether it is blasting on to an on ramp, ripping up a curvy road or even just being able to carry all of my junk, the car does anything you could possibly want. And if I ever grow tired of it, I can always look at the aftermarket to spice things up.