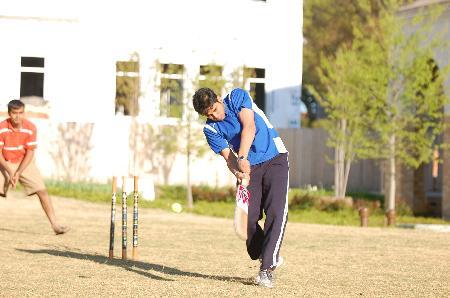 The up and coming cricket club team is receiving outside funds and prospective players with the help of former Horned Frogs.

Members of the Web site Killerfrogs.com, a forum about university athletics, began donating to a Paypal account dedicated to helping the cricket group, said the Web site’s owner Wes Phelan.

Phelan is asking for members to donate five to ten dollars and has already raised a little over $100, he said. Along with the money, the Web site’s members plan on donating their own bats and pads, Phelan said.

“We’re doing what we can to get them on the ground and going,” Phelan said.

Phelan said he thinks it is very possible to raise $300 for the group, but his goal is to reach $500. He also said the Web site will dip into its funds to match whatever amount is donated by its members.

Phelan is learning more about the sport in order to better help the team, he said. He also set up an area on the Web site’s message board dedicated to cricket making it easy for anyone who is interested to contribute to the team.

“If they want to get on there and talk about their passion then it’s there for them,” Phelan said. “But I’m your typical American. I don’t know anything about the sport.”

Sophomore Nitesh Kalwar, the cricket club creator, said club members are excited about the help they received. Kalwar was also impressed with Phelan’s speed in getting a fund started.

Kalwar hosted a barbecue at his house last week with about 60 students so the group could meet and talk with Phelan, he said. Kalwar also said that a recent Daily Skiff article helped recruit more members interested in getting involved with the team.

Kalwar said the Web site would help promote the group with apparel and advertisements.

“We are all international students and do not have a lot of contacts,” Kalwar said. “He (Phelan) has helped us to get in touch with others who can also assist us.”

Kalwar began recruiting players for the club last summer. Kalwar wants to have about 80 players before getting serious about a club team.

The cricket team practices on Saturdays from 1 to 4 p.m. at the Alice Carlson Applied Learning Center.