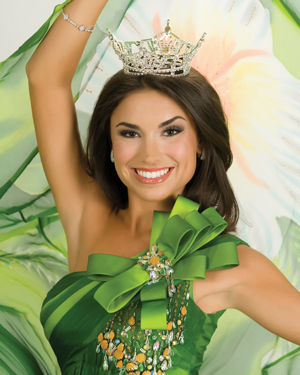 Two friends hug on stage while confetti rains down and music swells.They are both in tears. The audience goes wild as one girl bows to be crowned, while the other looks on with shining eyes.

It sounds like a scene from “Miss Congeniality,” but for best friends Ashley Melnick and Jordan Johannsen, it really happened.

The girls met two years ago at the annual Miss Texas spring meeting during a bus ride to a charity event.

Later that year, Johannsen transferred to TCU from Arkansas and Melnick invited her to share a room. The two immediately began preparing for the pageant as a team.

“We did everything together,” Johannsen said. “We worked out together; we did homework together.” She crosses her fingers and smiles. “We were like this.”

Melnick said there was never any animosity between her and Johannsen.Instead, they worked together toward their shared goal.

“We knew we would have to separate our friendship and the pageant,” she said.”And that’s what we did.”

As Miss Fort Worth, Melnick spent much of her time meeting people around the area.In addition to honing her social skills, Melnick said she used the opportunity of being out and about in the Metroplex to work on toning her body in preparation for the evening gown and bikini competitions.

“If you were in Dallas in the Uptown area, you would see me running in the subway, up and down the steps,” she said.

Miss Texas contestants may all end up on the same stage, but they get there in many different ways.

Melnick got her start in pageants four years ago, when an American Idol producer in San Antonio told her she was way too “pageant-y” for the show.”They stopped me in the middle of my song and they asked me “do you do pageants?'” Melnick said.”Instead of being negative about the rejection, I was like “I guess I’ll do a pageant.'”

Kendall Morris, who entered the pageant as Miss White Settlement and was the third runner up for Miss Texas, started pageants at age nine as a way to get extra practice for baton twirling competitions.

Morris went on to win Miss Teen Texas in 2006, and Miss White Settlement in January of this year.

The 75th Miss Texas pageant was a week-long event that began with two days of rehearsing production numbers and walking patterns. On day three, the contestants have personal interviews with the judges.

Days four, five and six are the preliminary rounds. The girls are divided into three groups and on each night one group competes for a top 10 spot in swimsuit, evening gown, talent and on stage questions.

Johannsen and Melnick both won the swimsuit competition on different nights, which Johannsen said was a well-deserved pay-off after all their hard work.

Morris, a first-timer at Miss Texas, said the best way for her to describe the experience is “incredible.”

“I was the little girl that grew up watching the Miss Texas and Miss America pageants on TV every year with my mom,” she said. “The women that won the titles every year were my role models.”

Just like in the movies, pageants are a place to have fun and make lasting friendships.

Out of the final five contestants, Johannsen said she was good friends with four of them.

Morris said all the contestants were sweet and genuine. “Some of them have become my best friends, and I know that some will be bridesmaids in my wedding,” she said.

Another of the top 10 contestants, Allison Seward, is also a TCU student and just pledged Morris’ sorority.

As a third year veteran of the Miss Texas pageant, Melnick said it was easier to relax, enjoy the experience and not worry about the other contestants.

After three rounds of preliminaries, the contestants were then narrowed to top ten.Johannsen, Morris, Melnick and Seward all made the cut.At that point, the ten young women ran through the swimsuit, evening gown and talent rounds one final time.

After top ten, the final five contestants were called.

Morris was the last of the five to be called, and she proudly took her place next to Melnick and Johannsen.

“I remember looking at them, and we all made the Horned Frog hand sign on stage,” she said. “TCU was very well represented at the Miss Texas pageant.”

Johannsen explained the excitement as she listened to each of the final five contestant’s names be called at the end of the night.Fourth runner up, then third, then second.

“Then we knew it was either her or me,” she said.

When Melnick won, Johannsen said she felt nothing but excitement for her friend. Morris finished as the third runner-up.

As for Melnick, she said she is still blown away by the reality of winning the competition.

“I have this opportunity that only 74 other women in the state have ever accomplished,” she said.It’s just so humbling to have this job8212;to be able to utilize what God gave me and to then share it with everyone else.”