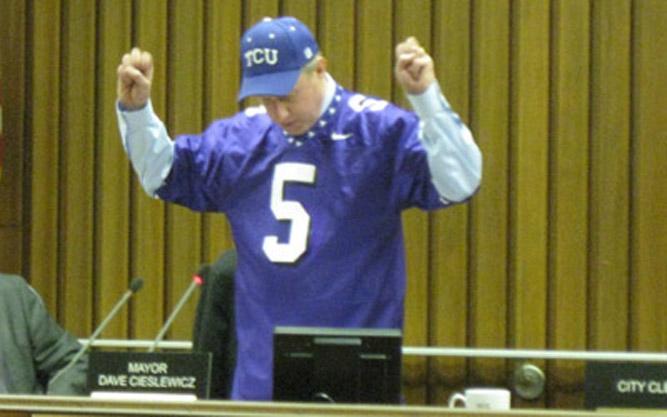 Mayor Dave Cieslewicz of Madison, Wis., briefly exchanged his Badger red for Horned Frog purple after losing a bet he made with Fort Worth Mayor Mike Moncrief.

Cieslewicz wore a TCU jersey and hat to the Madison Common Council meeting on Jan. 4.

“Sincere congratulations to TCU and our good friends in Fort Worth,” Cieslewicz said at the meeting.

While congratulating the Frogs, he used air quotes as he described the “great victory” and the “beautiful purple ensemble” he was wearing.

The bet between the two mayors was over the outcome of the TCU-Wisconsin match-up in this year’s 2011 Rose Bowl played on Jan. 1. According to the bet, if the Frogs won, Cieslewicz would wear the TCU jersey and hat at the next Madison Council meeting.

If the Frogs lost, Moncrief would have worn a red Wisconsin jersey and hat to his next City Council meeting in Fort Worth. Cieslewicz mentioned, as he put on the jersey, that he sent red and white Badger gear to Fort Worth before the game took place.

“Some are saying that’s what jinxed our team,” he said, “And I take full responsibility, I let everybody know.”

Moncrief made a similar bet with Boise, Idaho, Mayor David Bieter last year when the Frogs played Boise State in the Fiesta Bowl. He lost the bet and wore a orange and blue Broncos jersey to the first City Council meeting after the game.

He offered the same bet again this year to Cieslewicz.

“Fort Worth is proud of everything coach Gary Patterson and the TCU football team have accomplished this year,” Moncrief said in a statement released by his office. “We want to show our support in every way possible.”

In addition to the jerseys, the mayors made another wager. The losing mayor would send a symbolic item representing his city to the winning mayor.

Moncrief chose a pair of Justin boots and Cieslewicz chose a Trek Allant bicycle. Moncrief was not required to send anything to Madison because of the Frogs’ win, but he sent the Justin boots to Cieslewicz anyway as “a token of Fort Worth’s friendship and respect” toward the people of Madison, according to his letter in the Jan. 5 edition of Madison newspaper, The Cap Times.

Sophomore finance and accounting major Andres Ventura said he felt Moncrief’s win this year was a good way to get over the disappointment of last year.

“Last year, it was embarrassing, so it was nice that he won the bet because it would have been the second time in a row we lost a bowl game,” Ventura said.