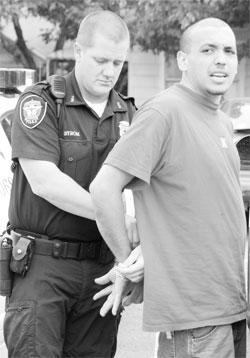 A woman, who was arrested last October with her brother on charges of breaking into a vehicle on campus, was sentenced to a year in jail Monday, Tarrant County District Attorney Joshua Ross said.Lori Quintanilla, who was 26 when she was arrested and pleaded guilty to the charge of vehicle burglary, received the maximum punishment for a Class A misdemeanor, Ross said. Matt Quintanilla, her brother who was 21 at the time of his arrest, is currently in prison for his activities at TCU and other charges, he said.

At the time of the arrest, Matt Quintanilla told former Skiff reporter Jamie Crum, a senior broadcast journalism major, that he and his family were responsible for 15 to 20 burglaries a week in the TCU area.

“The police need to step up their game,” Matt Quintanilla said. “I break into cars all the time.”

“It was exciting for something I did to be recognized, but it was hard to play a role in a trial that would change people’s lives and separate families,” Crum said.

Fazli discovered the Quintanillas at the crime scene after receiving a dispatch call about a suspicious vehicle in the parking lot in front of the ROTC building. Matt Quintanilla was found in the back seat of a sport utility vehicle holding a DVD player, and Lori Quintanilla was with her 3-year-old son in a car parked behind the SUV, which had a broken window, according to an Oct. 11, 2005 Skiff article.

Ross said the Quintanilla siblings and their family are responsible for numerous car burglaries all over Fort Worth.

The judge’s decision to issue Lori Quintanilla the maximum punishment for her offense is “a statement by the police department, the burglary victims and the district attorney’s office that this will not be tolerated,” Ross said.