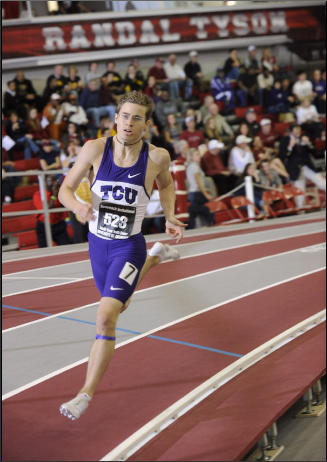 The Frogs’ track & field team broke two meet records and a pair of venue records, set a university record in the women’s 60 meters and won seven conference titles this weekend at the 2011 Mountain West Conference Indoor Championships at the Albuquerque Convention Center.

“The women finished second, and we will obviously be pleased with that,” head coach Darryl Anderson said. “We had a bumpy start today. I didn’t think we had a lot of pep in our step in the 60-meter hurdles and the 60 meters, but we got to a point in the meet where we decided that we were going to fight. We were able to fight and get ourselves into second place, and I know our women’s team is going to be a lot better as we move forward in preparation for the outdoor championships.”

Senior sprinter Jessica Young received the MWC High Point Award and the Outstanding Female Performance Award, winning gold medals in the women’s 60 meters, 200 meters and as the anchor on the Frogs’ first-place 4×400 relay. In the women’s 60, Young dashed to the finish line at 7.17 seconds to win the gold medal and become the fastest collegiate female runner in the country. Her time set a multitude of benchmarks, snapping records for the MWC, the championship meet, the Albuquerque Convention Center and the TCU program record. The time also was a new personal best.

On the men’s side, senior Mychal Dungey blazed to first place in the 200, earning his second career MWC title in the event.

Triple jumper Cameron Parker climbed to the top of the medal stand to claim his gold medal after leaping a season-best 51 feet, 10 inches.

TCU now will prepare for meets at Arkansas and Iowa State next weekend.