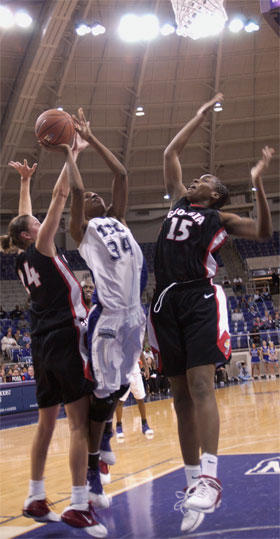 Monday night’s game against the Georgia Bulldogs is one TCU head women’s coach Jeff Mittie said he would rather forget. The Lady Frogs were defeated 80-51 by the 11th-ranked Bulldogs.”I’d prefer to leave this one behind as quickly as possible,” Mittie said. “It’s time to prepare for Mississippi St.”

All seemed well for the Frogs early in the ball game as junior guard Natasha Lacy had her way against the undersized guards for the Bulldogs. Lacy scored early and often for the Frogs, pouring in 11 points in the first eight minutes of the game.

“Lacy is such a good player,” said Bulldogs head women’s coach Andy Landers. “We’re good at that position, but we’re 5’7 there, too. We were concerned about that match-up and that is the biggest reason we went zone tonight.”

“Tonight our zone offense wasn’t very good,” Mittie said. “Early in the game we were able to post their guards up, then they went zone and it was very ineffective. The first half we got a lot better shots. We just weren’t getting any of them to go.”

The second half started out much the same way the first ended for the Frogs. The Bulldogs came charging out the gate with a 15-0 run. The Frogs didn’t help their cause much as they struggled to hold onto the ball against the Bulldog pressure.

Lacy said the Frogs expected the intensity from the Bulldogs.

“We knew coming in their guards were quick, and they like to take advantage of every opportunity they get,” Lacy said. “They were in man to begin with, and I got off to a quick start. After they switched to zone, it was hard to get anybody a good shot.”

One of the players who couldn’t seem to find a good shot was sophomore guard Adrianne Ross. She had an uncharacteristically bad shooting night, going 2-11 from the field including 0-3 from behind the three-point line.

“She’s playing in her first couple games in a long time,” Mittie said. “I think she looks good. Her leg looks good. It’s just going to take some time. She made some good moves down the stretch for us.”

Ross wasn’t the only one who contributed toward the latter part of the game for the Frogs. Freshmen guard Whitney Regian hit a runner in the lane late and senior guard Stephanie Thiel hit two field goals late, one which was her first ever Division-1 field goal that wasn’t a three-point basket.

“It was good how Whitney and Stephanie came in and made buckets,” Mittie said. “They came in and stayed within what we were trying to do to get better as a team. Marissa Rivera did some good things down the stretch, too. They did a good job of staying within the system.”

“Tasha (Humphrey) is a good strong player and everyone knew that,” said sophomore forward Lorie Butler-Rayford. “She is a big presence in there. They should be grateful to have a big post like that.”

Landers said he is confident the Frogs will adjust after losing Sandora Irvin to the WNBA, but said it will just take some time.

“When you lose an Irvin, you’re losing a centerpiece, where it started and finished every game,” Landers said. “So much of their game went through that great player, and there’s nothing wrong with that. The Chicago Bulls won a few championships off that mentality. It’s going to take a while for them to figure out their identity, but they will have that down by the time they reach conference play.”

Mittie said the team can do nothing but move forward and hope this will never happen again.

“I can show you all the games in the 13 years I’ve been a head coach, and there’s almost always one every season that you can throw out and say, ‘What the heck happened tonight,'” Mittie said. “I hope this was that game.