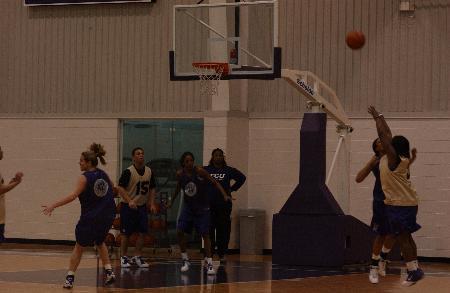 As the women’s basketball team prepares for the season, it needs more players for its practice squad, the team’s video coordinator said.

The team needs four or five players to round out the squad, said Adam Call, the team’s video coordinator.

Mack Haisten, a junior finance and entrepreneurial management major, plays basketball on the squad. Haisten started playing on the squad during his freshman year.

The generally all-male squad helps prepare the women’s team for games by playing scrimmages against them during practice, Haisten said. For example, if the women are practicing defense, the practice squad will play offense and vice-versa.

Haisten played varsity basketball for three years in high school, as did most of the practice team members.

“It’s a good, fun workout for guys who like to play basketball,” Haisten said.

Call said the only major qualification needed to play on the squad is a decent background in basketball.

“I think it gives you more motivation to scrimmage against different people,” Mittie said.

The squad is coached by one of Mittie’s assistants.

“Our practice squads have really helped us prepare for playing some of the best teams in the country,” Mittie said. “And they have really been a fun part of the practice, too. The guys that have done it in the past have really come in with a great attitude and I think enjoyed being around the team. I know our team enjoys having them in practice. They are really just like a part of our program.”

The top teams in the country have a male practice squad, Mittie said.

Haisten said one of the benefits of playing for the squad is players get free shoes, a free jersey and free shorts to practice in. Players also get to register for classes early so the players can make sure they are available for practice, he said.

“I think usually, for the most part, the guys that we have are fairly dedicated to it and try to be here as much as they can,” Call said

There are no tryouts for the squad, Call said.

Anyone interested in playing must be cleared by the NCAA and must be enrolled full-time at TCU, Call said.