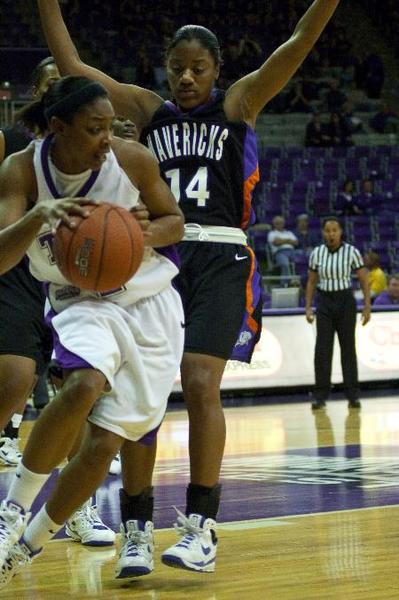 For the second time in school history, the Lady Frogs have begun a season with four wins. But despite a perfect record, head coach Jeff Mittie said his team still has a lot to learn.

“We haven’t handled success very well,” Mittie said after the team’s 89-75 win against Sam Houston State on Sunday. “Our record says good things, but I don’t believe we played better today. I think this was our worst performance of the year.”

Before the season, Mittie called this year’s team the biggest he’s ever coached. However, Mittie said Sunday night he still is not happy with the production from his interior players.

“We’re just not getting the production that we need to be getting out of that position,” Mittie said. “We’re trying to rotate and give everybody chances, but we need some people to step forward here, and I’m concerned as a whole that we’re drifting along right now.”

The Lady Frogs dominated the Bearkats in the paint, outscoring them 40-20. Three Lady Frog post players – Chantelle John, Micah Garoutte and Micaela Younger – set season highs in scoring against SHSU. However, TCU only finished with a seven rebound advantage over SHSU, and the Bearkats scored more second-chance points than the Lady Frogs.

Garoutte, who had started the previous three games for the Lady Frogs, came off the bench Sunday. She said that served as a motivating factor for her.

“You start for the first couple games, and then not starting is like, ‘Well, I really haven’t been doing my job,'” Garoutte said.

The first half was business as usual for the Lady Frogs. TCU outscored SHSU 24-6 in the paint in the first 20 minutes. All of the Lady Frogs but one, freshman guard Antoinette Thompson, scored in the opening half.

In addition to winning the battle inside, TCU’s stellar perimeter defense was also on display. The Lady Frogs held SHSU to just 31 percent shooting from the field and forced 16 Bearkat turnovers in the half. TCU entered the locker room at halftime with a 44-24 advantage.

The Bearkats did not give up, though. After trailing by 25 points with 11 minutes to go, SHSU would score on its next five possessions to cut the Lady Frogs lead to 16.

Despite the fact TCU held a double-digit lead for a remainder of the game, the final few minutes had fans holding their breath.

Bearkat guard Britni Martin scored 11 points, including three 3-pointers, in the final five minutes of the game, and SHSU trimmed TCU’s lead to 10 but could not come any closer. Sophomore forward Emily Carter calmly sank four straight free throws to put the game out of reach.

Junior guard Eboni Mangum said the team lost focus in the second half.

Mangum also set a season-high for scoring with 12 points in addition to recording four steals. Although she suffered an ACL injury in her right knee and has had to play with a brace on the knee all season, Mangum says she is getting used to it.

“There’s not too much I can do to it any more,” Mangum said about her condition.