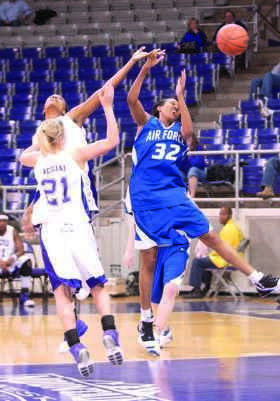 ‘Twas 19 days before Christmas, and the Lady Frogs were a mess.Fresh off a 40-point loss to No. 2 Duke on Dec. 6, the TCU womens’ basketball team was a disappointing 2-5 and had lost to three top 15 teams by a combined score of 249-157. After just seven games, the season was already slipping away.

Sophomore guard Adrianne Ross said that while things looked bleak early, the players forced themselves to keep a positive outlook.

“We looked at ours as one of the tougher nonconference schedules,” Ross said. “We were mentally tough.”

With that mind-over-matter approach, the Frogs ripped off four consecutive wins and have currently won six of their last seven. The offense, which had been scoring just 61 points a game before Dec. 6, has now upped its production to an average of almost 76.

While some of the scoring increase can be attributed to the confidence boost that a long winning streak brings, it has also stemmed from the Frogs’ fast-paced style of play.

Both players and coaches said they have no doubt about the team’s identity.

“Speed. We like to get out and run,” said junior guard Natasha Lacy. “That’s fine for us.”

“We feel like speed and athleticism is our advantage,” Mittie said. “We just look to create as many athletic plays as possible.”

One of the best ways to fuel a fast-break offense is through tight, aggressive defense — an area in which the Frogs have also markedly improved. Before Dec. 6, they were allowing 73 points a game, but have since trimmed the number down to 62.

“For the past four weeks we’ve been trying to create offense out of our defense,” Mittie said. “We play better when we do that.”

Though no team ever plans on losing, true leaders are born of adversity. Lacy said the players were finally able to be successful when they held themselves accountable for their shortcomings.

“We all come from winning traditions, and we were all looking back,” Lacy said. “But you have to adapt. We all take a big responsibility.”

Ross said that in a way, every player and coach has become a leader.

“I think everyone is doing their part,” Ross said. “When the team is down, the coaches have done a great job of pulling us together.”

With the Frogs once again showing a glimmer of last season’s success, Lacy feels confident about the future.

“We’re going to come out of this with a winning record,” Lacy said. “You can guarantee that.