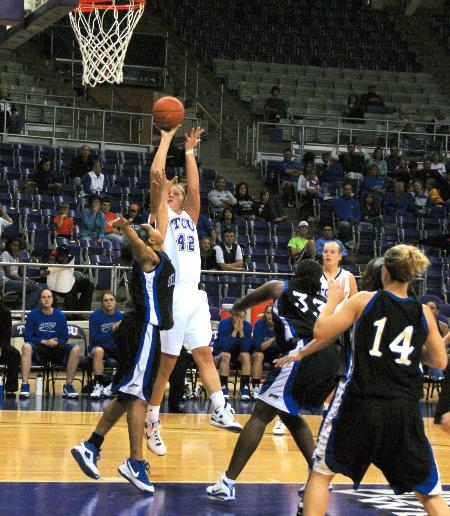 The Lady Frogs’ last-second, come-from-behind win over the Oklahoma City University Stars in their final tuneup before the start of the regular season made it evident that there is still work to be done.

Head coach Jeff Mittie said rebounding was a huge concern, despite outrebounding the Stars 47-46 in the 56-55 victory.

“That’s been something we’ve spent a lot of time on in the last week,” Mittie said. “We’re not very quick to the ball right now.”

Despite a significant height advantage, in the Lady Frogs’ favor, the Stars outscored TCU in the paint 22-18. The Stars’ tallest player measured 6 feet 1 inch, while the Lady Frogs had seven players at the 6-foot-1-inch mark or taller.

“We just need to play harder in all angles of the game,” sophomore Helena Sverrisdottir said. “We can see now that there are a lot of things we can work on.”

Forward Chantelle John was the game’s leading rebounder with 10 boards. As a transfer in her first game action with the team, John didn’t waste any time getting on the board, scoring the team’s first two buckets and six of their first eight points. Mittie said he was pleased with her effort throughout the game.

“We did not do a very good job of getting her the ball in the second half,” Mittie said. “I thought she got fatigued because she was really working hard to get some things done down there.”

Mittie expects John to get more touches as the offense improves.

Guard TK LaFleur and forward Rachel Rentschler also saw their first action with the Lady Frogs as members of the starting lineup. LaFleur and John were with the team last season but didn’t play because of NCAA rules for transfer players. Rentschler, also a transfer, was granted a waiver by the NCAA that allows her to play in her first season with the program.

“It doesn’t feel like they just came here,” Sverrisdottir said. “We’re really close as a team.”

LaFleur impacted the game at both ends of the court, finishing with 11 points, five rebounds, two assists and four steals. Early in the first half, with the Stars attempting to capitalize on a TCU turnover with a fast break bucket, LaFleur intercepted a cross-court pass and set up guard Shayla Moore with a layup at the other end.

In the second half, LaFleur showcased her athletic ability by leaping up and snagging a Stars’ pass out of the air for another steal.

“She’s probably shaking some rust off too,” Mittie said. “First game in 16, 18 months. You come out and it’s almost all new again.”

LaFleur hit a pair of big 3-pointers down the stretch to pull the Lady Frogs within one. Overall, the team struggled from the field.

“We weren’t shooting well at all tonight,” Sverrisdottir said. “We only shot 30 percent and we know that we can do better than that.”

With 5.5 seconds left on the clock, the Lady Frogs came out of a timeout trailing 55-54. Sverrisdottir received the inbounds pass in the post and was immediately double teamed and fouled as she went up for the shot, sending her to the free-throw line with 3.4 seconds to play.

She sank the first and rattled the second home to give the Lady Frogs a 56-55 lead. Sverrisdottir led the team with 12 points and five assists and contributed eight rebounds as well.

The Lady Frogs’ previous lead came with 1:51 left in the first half.

“We played a lot harder in the last two minutes of the game than we did in the first part,” Sverrisdottir said.

Mittie said the team is going to have to win at times without style points and focus on staying out of foul trouble, maximizing possessions and controlling tempo.

“We’re going to have to win some 65-58, 59 games,” Mittie said. “While I spent a lot of the night frustrated, it was good to see us handle some things down the stretch.”