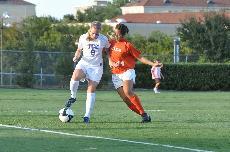 The soccer team secured another win under its belt after defeating the University of Texas at San Antonio 1-0 in the Friday night game.

At about seven minutes and 20 seconds into the game, midfielder Kaylie Garcia who wore the number two jersey was assisted by a throw in from the right side of the field just before she shot the ball into the lower left corner of UTSA’s goal from the middle of the box.

In the first half of the game the Lady Frogs poured pressure onto the Roadrunners’ defense and took 19 shots versus the UTSA’s two by halftime.

Jordan Calhoun, sophomore and Mountain West Conference Offensive Player of the Week, shot five of the 19 at halftime. Goal-scorer and returner after playing with the Mexican national team this summer, Kaylie Garcia drummed up two additional shots in the first half in addition to the game-winner.

The second half, however, the shots on goal dropped to nine for TCU and picked up by three for UTSA.

The UTSA Roadrunners did not succumb easily to TCU’s persistence toward the goal.

Goalkeeper Dacia Webb from the orange team made nine total saves in the game, including a play near the end of the second half when TCU defender Katie Taylor took a hard shot toward the upper center of the Roadrunners’ goal, and Webb, stretching upward, palmed the ball midair and pushed it out of the way to the right side of the goal.

Dan Abdalla, the head coach of the university’s soccer team, said he felt comfortable with the defense after fixing some errors for future games, but expressed less ease with the team’s offense.

“I didn’t think our conviction to the attack was anywhere near where it needed to be,” Abdalla said. “We’ve got to spend a lot of time on our work rate, and our heart, and just be willing to put ourselves out there.”

Calhoun expressed frustration with the final shots-on-goal statistic, which for TCU came out to 28, and only one with the ball in the back of the net.

“It was our first home game,” Calhoun said. “We came out with a lot of bite, but our intensity dropped and we need to pick it up.”

Despite her goal in the first eight minutes, Garcia was also on the wave of dissatisfaction with the game.

“We just need to fight harder to get that ball in the net,” Garcia said. “We’re going to come out with a different attitude and try to make it better the next game.”

When asked about her preparedness coming back from her training in Mexico this summer, Garcia said that soccer is the same everywhere, but the training was more intense and that it did prepare her for this year’s season with the Lady Frogs.

The soccer team left Friday’s game after defeating the San Antonio affiliate of its first victory, the nationally ranked (no. 15) University of Texas at Austin. The games against both orange teams contributed to the Friday MWC record of 2-0-0.