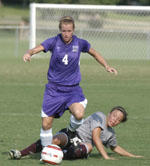 This season brings forth a new head coach and a new conference for the TCU women’s soccer team that features a majority of underclassmen.Head coach Dan Abdalla came to TCU from Nevada – Last Vegas, where he served as head coach from 2000-2004. He collected a record of 54-38-8 at UNLV, his alma mater.

Abdalla said he is happy to be at TCU because it is a well-rounded institution.

“TCU is a very unique and special place and I am just excited as can be to be here,” Abdalla said.

Abdalla is replacing David Rubinson, who coached the Frogs since 1986 when the program began. Rubinson achieved a below .500 record at 136-170-20. One of the bright spots during Rubinson’s tenure is that he helped guide the Frogs to 10 wins in four different seasons.

Midfielders make up the majority of a roster loaded with 14 underclassmen and nine upperclassmen. The rest of the roster is made up of forwards, defenders and three goalkeepers.

Abdalla said the backline is going to be one of the Frogs’ strengths this season. Juniors Karissa Hill and Breanne Kaldheim will anchor TCU’s defense and provide leadership for the team.

“They just both bring such a passion for the game that they play with that’s just unbelievable,” Abdalla said.

Coach Abdalla said the team is developing chemistry and learning to play with each other more efficiently.

Due to graduation, the Frogs lost forward Jessi Moore, who was the team’s lead scorer with 26 points last season and also earned a second-team all-Conference USA spot.

One player who stepped up in her absence in the Frogs two exhibition game wins was junior forward/midfielder Angie Nickens, who scored three goals, two of them coming in a 3-0 victory against Texas Women’s University on Sunday.

“We’re going to need her from a leadership standpoint to really have an impact,” Abdalla said. “Her work rate and her pace makes her dangerous every time the ball gets around her.”

Nickens said the team can improve on their performance against Texas Women’s University.

“We did pretty good (against Texas Women’s University), but there are still some areas that we definitely need to work on,” Nickens said.

“We have been training together since July, basically, and that has helped us so much fitness-wise and getting to know each other, and we are definitely ready for the opener.”

Senior midfielder Bara Gunnarsdottir said the team will have to adjust to facing different competition and cope with the higher altitudes of the MWC.

She insists that head coach Abdalla is more intense than Rubinson.

The regular season will kick off at 5 p.s. Friday against the Texas Tech Red Raiders at Garvey-Rosenthal Soccer Stadium.

Texas Tech is coming off a 2-0 exhibition match win over West Texas A&M on Saturday.

Last season in Conference USA play, TCU finished 4-5 with a 6-11 overall record and were three spots away from securing a C-USA Tournament berth. At one point in the season, TCU went on a four-game losing streak.

Abdalla said the Frogs performed well in exhibition play and worked through adversity which will help them in the regular season.

“The first couple of weeks are going about seeing what we can get, and seeing how quickly we can adjust to what other teams are doing and make them adjust to us,” Abdalla said.

“We’ve got a good head start on everything and everything is a new start in every aspect …This is a team that shows up to compete and I think that’s going to give us a chance.