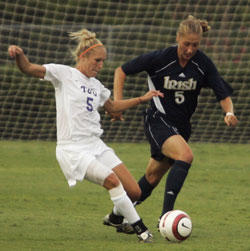 The Horned Frogs womens soccer team faced the number one ranked Notre Dame Fighting Irish Friday and fought to a 2-0 loss night at Garvey-Rosenthal Soccer Stadium.Their current record is 2-3-0 according to gofrogs.com.

After the first half was mostly played in TCU’s middle third of the pitch, the Horned Frogs returned to the sidelines in a 0-0 draw with the Irish.

“We played a four five one formation trying to slow the pace of the game,” Abdalla said, “We had speed up front and it almost worked out a couple times.”

The longball strategy used by TCU relied on feeding the ball to Lizzy Karoly with hopes to get her in behind the Notre Dame defenders Abdalla said.

Following a scoreless first half, Notre Dame came out and netted their first goal after ten minutes.

Freshman Michele Weissenhofer began the play with a corner kick that was deflected back to her on the edge of the 18 yard box. She followed the deflection with a cross towards the far post and connected with 5-foot-10-inch Midfielder Jill Krivacek who placed a header into the back of the TCU goal.

TCU goalkeeper, Katie Buchanan said, “It was very difficult with that many people in the six [yard box],” she added, “They won the ball and played stronger in the air.”

The second goal came with 19:51 left on the clock. Weissenhoffer again set up a scoring opportunity; this time on a free kick just outside the TCU penalty box. After crossing the ball around the wall of TCU defenders, Brittany Bock, another Notre Dame midfielder finished the play with a header into the net by the far post.

“The second goal we were caught ball watching along with a bit of fatigue,” Abdalla said.

The second half was dominated by Notre Dame and their 8 corner kicks that continually added pressure to the TCU defense.

“Both goals in the half were more of a byproduct of speed and pressure on the defense,” Notre Dame head coach Randy Waldrum said.

The Horned Frogs will face the University of Houston Cougars on Sunday afternoon at 1 p.m. at Garvey-Rosenthal Stadium.