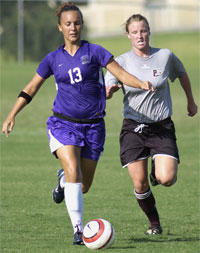 The TCU women’s soccer team kicks off the regular season with visits from Texas Tech and Texas A&M this weekend.Head coach Dan Abdalla said he is anticipating this weekend’s challenges.

“It’s always fun to play the big-named schools,” Abdalla said. “It’s motivation. If you can’t get up for these type of games, then what does motivate you?”

Texas A&M comes to town ranked sixth in the nation.

“The A&M game will be very challenging,” junior midfielder Kim Thompson said. “But we feel we have the ability to go win both games. The team has been working very hard, and we are all fit.”

Abdalla said he expects Texas Tech to be a lot better this year as well.

“A&M will be very good,” Abdalla said. “Tech will be better than they were last year. They have a new coach, and he always does a good job of preparing his teams. Their team is very similar to ours.”

The TCU women said they are coming into these games expecting to win.

Junior goalie Katy Buchanan said the older players on the team, including herself, will have to step up.

“Players such as Angie Nickens and Karissa Hill will have to play strong on the back line,” Buchanan said. “I have to also be strong in the goal and act as basically another defender.”

Thompson said the team will not rely too heavily on any single player, as this year’s team is well-balanced.

“Everyone on the team contributes,” Thompson said. “We have a lot of freshmen, and they are all stepping up. I guess you could say we’re more a team like the Detroit Pistons rather than like the L.A. Lakers.”

Abdalla said players such as Hill, midfielder Sara Schneider, defensive player K.D Waters and Nickens will all be depended on to help lead the team.

Junior defensive player Breanne Kaldheim said the team is not focusing on any particular player this weekend, but rather preparing for the season as a whole.

“A&M has a lot of new players,” Kaldheim said. “They are known to be very physical and athletic.”

Abdalla agreed with Kaldheim and said it is too early in the season to know much about any particular player, but expects a victory in both games with a little help from their 12th player.

“We want the fans out there,” Abdalla said. “The players really feed off of the crowd. This weekend will really tell us where we are at and what we need to work on. We want to win!”

The Frogs will host Texas Tech at 5 p.m. Friday and welcome the Aggies at 1 p.m. Sunday at Garvey-Rosenthal Stadium.