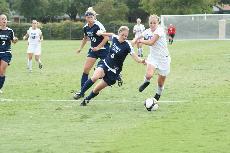 The women’s soccer team is looking to get back on track with their regular season home opener against Texas-San Antonio after dropping a 4-1 exhibition match to the Mexican national team Tuesday night.

“Our biggest focus is going to be working on our communication on the field and holding each other accountable to what we’re doing on the field,” head coach Dan Abdalla said.

The Horned Frogs face a Roadrunner squad coming of 2-1 double overtime victory over the University of Houston. Texas-San Antonio comes to Fort Worth with a 1-1 record with their only loss a 5-0 drubbing by Texas Tech.

Abdalla said that the team would employ an aggressive game plan to put the pressure on the Roadrunners.

“We want to be aggressive and we really want to attack at them and make them have to defend us,” Abdalla said.

TCU enters the match with a 1-0 regulation record after a 2-1 victory against the then No.15 University of Texas in Austin on Aug. 21.

Sophomores Jordan Calhoun and Katie Taylor were named the Mountain West Conference Offensive and Defensive Players of the Week after the victory. Calhoun was also named to Soccer America Women’s Team of Week. Calhoun leads the team with two goals while Jackie Torda and Kaylie Garcia are tied for the team lead in assists with one apiece.

The Horned Frog are just ranked outside the top 25 at No. 28 by the NSCAA/ADIDAS National Poll.