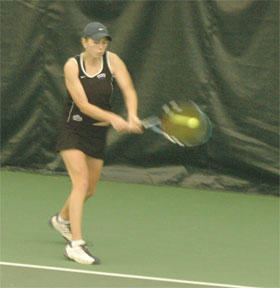 The Horned Frogs continued to utilize home-advantage Wednesday, beating Oklahoma 7-0 and extending their home-winning record to 4-0.TCU (6-3) controlled almost every match, and lost only one set to the Sooners (4-5) all day. Head coach Dave Borelli said despite the Frogs’ obvious skill advantage, he was pleased with the squad’s effort.

“I thought it was good,” Borelli said. “I thought we competed well. I think we’re clearly a better team, but I thought we did a very good job of competing.”

TCU showed early signs of its dominance by sweeping doubles play. The senior/freshman pairing of Helena Besovic and Anna Sydorska, currently ranked No. 8, finished their match with a flourish off a Besovic ace that neither Sooner came close to.

The No. 2 doubles match did not go so smoothly, however. Despite an eventual 8-7(6) TCU victory, the match was stopped temporarily when the judge lost count of the score and the two sides fell into a dispute.

After some convincing – and yelling in foreign languages – junior Ana Cetnik was able to get the score corrected. The match became slightly heated however, and the tension bled over into Cetnik’s singles match against Irina Lykina. Cetnik and Lykina again exchanged words over several calls during Cetnik’s 6-3, 6-4 victory – the last match to finish.

Cetnik downplayed the impact of both her victories.

“I’m satisfied as much as I win,” Cetnik said.

Part of the day’s animosity may have stemmed from the fact that Lykina has gotten the best of TCU over the past two years – she beat Cetnik in 2004 and Besovic in 2005. Borelli said he was pleased that Wednesday’s match worked out like it did, however.

“We won two matchups that we lost last year, the No 3 and No 5,” Borelli said. “Ana Cetnik lost to (Lykina) two years ago, and then last year Helena lost to this girl and now Ana beat her. I was also happy with Gloriann beating (OU’s Christi Baxley) because she lost to her last time.