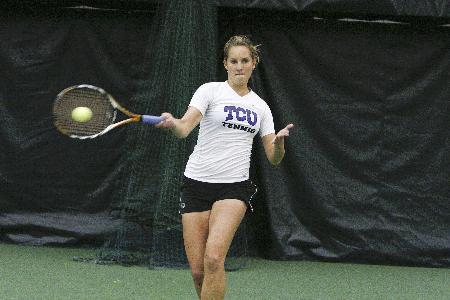 After losing its third consecutive event Saturday at home against the University of Alabama, the women’s tennis team will try to right the ship Thursday with a visit to College Station.

With both teams cheering on the final match from the sidelines, the team lost a nail-biter Saturday afternoon at the Bayard H. Friedman Tennis Center, falling to the Crimson Tide 4-3. The matches were moved indoors due to wind.

For the Horned Frogs, it was the second straight event that came down the final singles match, as sophomore Idunn Hertzberg fell to the Tide’s Taylor Lindsey, 4-6, 4-6.

Horned Frog head coach Jefferson Hammond said that because of the team’s tough schedule and high expectations there is bound to be some disappointment.

“We’re going to have ups and downs in terms of execution and now we’re having one of the downs,” Hammond said. “We’ll get it together.”

Freshman Gaby Mastromarino, who won in both doubles and singles play after defeating the Tide’s Meritt Emery in straight sets, said it’s always difficult for a team when an event rides on one player’s shoulders.

“I’ve been in this situation where I was the last match, and it’s really hard to have everyone watch you and know that it’s up to you, so I feel for her,” Mastromarino said of her teammate Hertzberg.

Alabama head coach Jenny Mainz said her team came out strong after losing its first doubles point of the season. She said experience was key in the final match because Lindsey had been in the final position on two other occasions this season.

Sophomore Maria Babanova, who found herself in the same situation in the last match Thursday when the team lost to Texas Tech University, said the Horned Frogs will rebound.

“We’re not upset,” said Babanova, who had won her doubles match with Mastromarino earlier in the day.

She said the team would be ready for Thursday’s matches at Texas A&M University. The match is slated for a 5 p.m. start.

“We’re going to compete against A&M as hard as we can, so we’re not worried at all,” Babanova said.