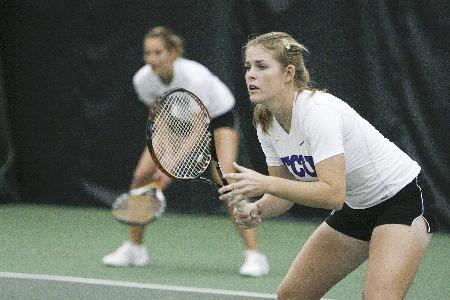 The No. 32-ranked Horned Frogs opened conference play with two matches on Friday and Saturday at the Aztec Tennis Center on the campus of San Diego State.

Friday’s match pitted the team against the No. 29-ranked Aztecs. The Horned Frogs walked away with a 5-2 victory.

Things went well for the team from the get-go as it claimed the doubles point when the duo of freshman Kayla Duncan and sophomore Katariina Tuohimaa defeated the Aztecs’ twin-sister pairing of Roxanne and Sierra Ellison, 9-7.

The Horned Frogs went on to win the first three singles matches, giving the team an early victory. Senior Macall Harkins, Duncan and sophomore Idunn Hertzberg, who sealed the win for the Horned Frogs, were the three players who made quick work of the Aztecs, each winning in straight sets. Tuohimaa also won her singles match against SDSU senior Holly Bagshaw, 6-2, 7-6 (6).

The action continued on Saturday when the team took on a No. 71-ranked UNLV squad in a rematch of the title match of last season’s Mountain West Conference Championships.

And once again, the Horned Frogs failed to find a way to top the Lady Rebels, losing 4-3.

After sweeping UNLV in doubles play, the Horned Frogs went on to drop four of the six singles matches.

Duncan and Hertzberg were the lone Horned Frogs players to win their singles matches.

The Horned Frogs owned a 3-2 advantage with two singles matches remaining, but Harkins and fellow senior Anna Sydorska, playing for the first time since March 8, failed to seal the win for the team, losing each match.

The Horned Frogs will have their opportunity to host some Mountain West Conference action when BYU, Utah and New Mexico come to Bayard H. Friedman Tennis Center for matches beginning Friday afternoon and lasting through Sunday.