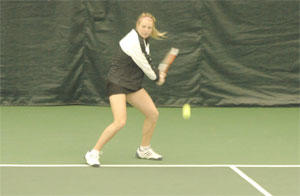 The women’s tennis team heads to Wisconsin Thursday for one of TCU’s most competitive tournaments of the year.The USTA/ITA National Team Indoor Championships event, which lasts through Sunday, is an invitational event that grants automatic bids to last season’s top 12 teams. The final four spots are allotted by an Intercollegiate Tennis Association committee.

Head coach Dave Borelli said the invitation is a testament to the team’s recent successes.

The Frogs won’t just play good teams – they’ll be playing the best. The field includes fellow Mountain West Conference member Brigham Young as well as Texas and Baylor. The Frogs will open competition against Vanderbilt, and will play a guaranteed minimum of three matches. This is TCU’s first invitation to the tournament in its 18-year history.

“It is the best competition in the country,” Besovic said. “It’s good practice for us.”

Borelli said the team is battling injuries both expected and unforeseen. Sophomore Nicole Leimbach is struggling with a foot injury, Borelli said, and junior Ana Cetnik is also working to get back to 100 percent health.

Besovic said the squad, while aware of the injury problem, is still a deep group.

“They’re all working on it as best they can,” Besovic said. “We have a lot of players, though.”

Freshman Anna Sydorska said the team is ready to compete with the tough field.

“We’re pretty excited,” Sydorska said. “We want to play our best. All together, we have a good team.”

The Frogs are coming off a strong performance from its Jan. 28 season-opener against North Texas, which was also an indoor match. TCU won on points by a 7-0 margin, and lost only set during the weekend to a tie breaker.