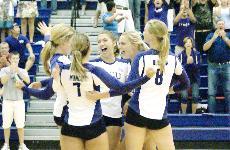 Prentice Lewis, head coach for the TCU women’s volleyball team, saw just how flawless and how disastrous her experienced club could play – all in the same day.

The Horned Frogs were riding high after two wins against the University of Arkansas and Grambling State in their very own Nike/Molten Invitational.

But after topping Arkansas on Friday in a five-set thriller and just five hours following an easy win over Grambling State on Saturday, the Lady Frogs displayed a disappointing championship game performance against Loyola Marymount, a team that was picked to finish second to last in the West Coast Conference Preseason Poll.

TCU didn’t come out with the energy Lewis was looking for, and fundamental mistakes cost the Lady Frogs to drop the first two sets of the game en route to a 1-3 loss.

With every failure comes a chance for redemption, and TCU will have a chance to bounce back on September 1 against a talented Baylor squad out of the Big 12.

“We have a long way to go,” Lewis said about her team’s preparation for the Lady Bears.

The Bears, who received five votes in the CBS College Sports/AVCA National Preseason Poll, return 11 letter winners from last season’s 18-13 campaign and a sixth place finish in the Big 12.

Baylor’s roster features two key returnees in Anna Breyfogle and Taylor Barnes who have helped the Lady Bears to a 3-0 start.

Breyfogle led the conference with 1.45 blocks per set last year, while Barnes finished first in the Big 12 in aces with 49.

Baylor hasn’t lost a set this season and is coming off of a 3-0 triumph over New Orleans in the championship of the Flo Hyman Invitational in Houston, Texas.

Regardless of Baylor’s high status and impressive start, Lewis expects nothing different from her team.

“We’ve played them every year so we know what they do well,” Lewis said. “They’re no different than any other team we play.”

Although the Lady Frogs may not approach this game any different from other matches, TCU might have one small thing in the back of their mind – it has never topped Baylor in the history of the five-match series.

The team’s hunger for its first victory over Baylor isn’t the only important factor. Tuesday’s game also presents TCU a key opportunity to boost its NCAA tournament resume with a solid non-conference win.

“That’s why you play non-conference games,” Lewis said. “It prepares you for your conference. Your preseason is your RPI. Who you play and how you set up is very important for your RPI standings, and to be able to win and play well helps confidence.”