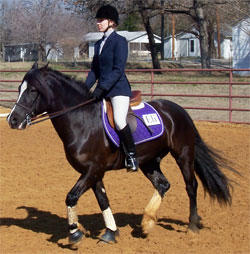 The first set of home equestrian meets of the semester was the building block for a young team, the head coach said.The Horned Frogs lost to the Fresno State Bulldogs by a final score of 1,161-1,059.5, Sunday. Both TCU and Fresno State won eight match points, but the Bulldogs managed to pull out more raw points from their events during the contest.

“In western performance, we did well,” head coach Gary Reynolds said. “But our English performance really brought us down.”

Western horsemanship was the team’s strongest event on Sunday as the Horned Frogs notched a 287-275 win over the Bulldogs. The team also had some strong numbers in the reigning event with English and western horsemanship specialist Carrie von Uhlit, a sophomore who earned MVP accolades for that portion of the meet.

“We have lots of new riders, and we’re just excited to get them out and give them some experience,” Reynolds said. “But we’re all improving with every meet.”

This score is already a large improvement over the 10-2 loss to SMU on Friday, which only included English style riding.

“It was our first home meet, and I think it stressed us all out,” freshman English rider Toni Rogers said.

Junior English rider Chelsea Stevens said the team learned a lot just from seeing an established team in action, and said she is confident the team will be able to compete harder against future teams.

The team is now preparing for the Feb. 24 meet against the Texas A&M Aggies. The meet will be on the road in College Station.

Reynolds said the best thing for the team is just gaining more experience before facing recognized squads. Teams slated for the Horned Frogs to face include the 2006 NCAA champion Auburn Tigers, as well as the South Carolina Gamecocks.

“Last semester we struggled just to have a full roster, and now we’re trying to get everyone experienced,” Reynolds said.