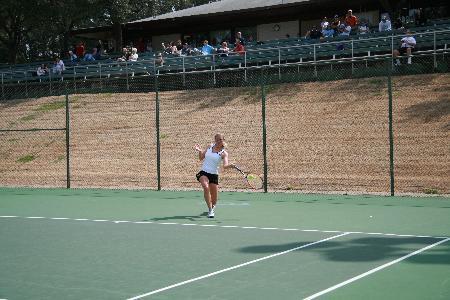 Tennis runs in the blood of TCU’s No. 1 singles player.

Nina Munch-Soegaard was coached by her father, Jan, a former Norwegian Davis Cup player who played in college at Murray State University in Kentucky.

Nina Munch-Soegaard, who has dual citizenship in the U.S and Norway, said she has been playing tennis since she was 2 and international tennis for almost 10 years.

As TCU’s No. 1 singles player and she has traveled to Europe at least once a year since age 12 to compete on Norway’s national junior team. She said she plays in the Federation Cup for Norway and competes in International Tennis Federation events.

Her time at TCU has been acclaimed, as well. She was named Mountain West Conference Freshman of the Year in 2006-2007 after an overall singles record of 21-6 and ended her freshman campaign playing at the No. 1 singles position for the Horned Frogs.

Head coach Jefferson Hammond said she showed she could handle the pressure of playing the No. 1 position as a freshman, and said she has improved her game since the end of last season.

Jan Munch-Soegaard said as a child, Nina did not have a choice – she had to go with him to lessons, so she grew up on the tennis courts.

“I could kind of tell when she was 8 or 9 years old that she could compete,” her father said.

Nina Munch-Soegaard, who is still in TCU’s No. 1 singles position and also plays No. 2 doubles, said she doesn’t get nervous playing tough competition and just focuses on her game.

“I just play whoever is on the other side of the net,” she said.

Hammond, who attributes some of Nina Munch-Soegaard’s success to her father, said Jan Munch-Soegaard understands the pressures that come with playing tennis and has prepared his daughter to play under pressure.

Hammond said Nina Munch-Soegaard, who was named Player of the Week by the Mountain West on March 6 after knocking off two ranked singles opponents, including No. 11 Melanie Gloria of Fresno State, is easy to coach because she has such a good attitude on and off the court.

Another accolade for the sophomore is the honor of being named Tennis Player of the Year for 2007 by the Texas Panhandle Sports Hall of Fame, said the key to tennis is to keep your composure and not worry about a single point.

Nina Munch-Soegaard, a nutrition major who plans to attend nursing school, said she would like to play on the Pro Tour after she finishes school.

Jan Munch-Soegaard said he thinks it’s a good idea that Nina Munch-Soegaard wants to play on the Pro Tour and she should have fun with it as long as she can.

“She’s shown that she can play with tough players,” Jan Munch-Soegaard said.