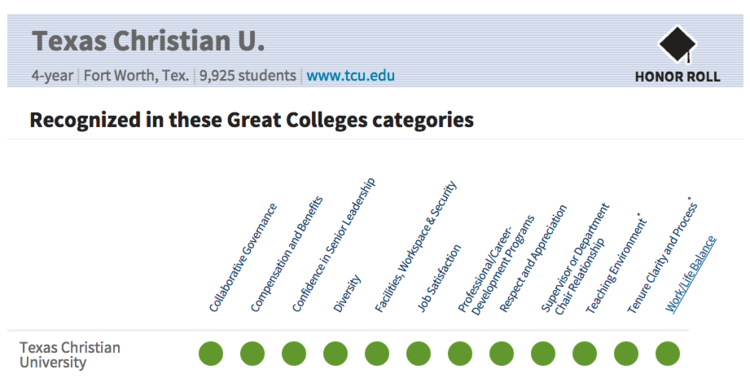 print
For the fifth consecutive year, TCU was named under the category “Great Colleges to Work For” in The Chronicle of Higher Education.

TCU secured a spot on the Honor Roll, which distinguishes institutions with recognition in more than four categories measured.

TCU was the only institution honored in all 12 categories on the Honor Roll.

Karen Kukulka, the director of operations for The Chronicle Great Colleges to Work For, said that it is very rare for a university to be recognized in every category.

“TCU is not the first participant to have achieved this level of recognition, but it is one of only a handful of schools in 8 years to have done it,” she said.

Kukulka said that there were 281 schools recognized in 2015. She added that over 1,000 institutions have received honors since the list began in 2008.

Chancellor Victor Boschini sent out an email to all TCU faculty and staff on Tuesday. He said it was an honor to be recognized.

“It is especially meaningful as this recognition comes directly from our faculty and staff,” Boschini said in the email. “TCU strives for excellence in all it does, and it is rewarding to be acknowledged for those efforts.”

According to their website, The Chronicle of Higher Education surveyed a random sample of TCU employees who provided answers directly to the publication. Colleges named to the Honor Roll were chosen based on responses to the survey in one or more categories.

TCU was honored in all 12 categories, including areas of compensation & benefits, job satisfaction, respect and appreciation and teaching environment.

According to the website, the Honor Roll distinguishes between 4-year and 2-year Colleges as well as enrollment size. The 4-year colleges are split into sections of small, medium and large universities.

A complete list of 2015 award recipients can be found here.