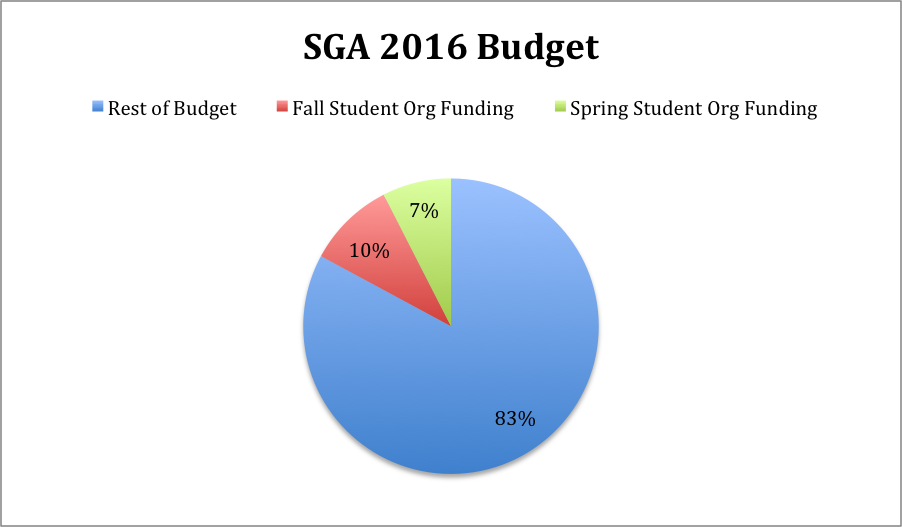 print
The Student Government Association has revamped its budgeting process in an effort to encourage student organizations to exhaust the $70,000 set aside for programming this semester.

Watson and finance committee chair Drew Atkins spent part of the summer restructuring the process that SGA uses to support student organizations.  SGA leaders will discuss the details of the plan, which was unanimously approved last week, with student organization leaders Wednesday at the annual president’s dinner.

There are several key changes that Watson said he hopes will encourage students to spend money. Unlike in years past when students sought money for the whole year, student organizations can now apply for money during the fall semester and again in spring.

The application process began Sept. 1, and presentations to the SGA finance committee begin Sept. 15.  The committee, which meets weekly, gives organizations 10 minutes to discuss how they want to use the money. This includes a five minute question and answer portion.

Atkins said he thinks the rules will make the process more structured, which will help organizations give better presentations.

Because this is the first year, Watson said he didn’t know how long the process will take. However, he encouraged students to apply early.

“As of right now, the amounts that we have seen come in are higher than what I’ve really seen in the past,” Watson said. “There are a lot of other people who could want or use or need these funds.”

The SGA budgeted $70,000 for student organizations this semester; of that, $25,000 is dedicated to club sports. That money will be distributed by the Recreation Center, which holds separate meetings to hear from teams.

“They allocate that money accordingly to club sports because they know what these clubs need better than we know,” said Watson, who added that he sometimes sits in on these meetings.

The new plan will be presented to student organization presidents at SGA’s annual President’s Dinner Wednesday, which is set for 6:30 p.m. in the Kelly Alumni Center.

SGA Vice President of External Affairs Katie Phillips said the affair is catered by Cousin’s BBQ and Nothing Bundt Cakes. SGA president Maddie Reddick is expected to talk about the value of student organizations, while Watson is supposed to explain the new system. Phillips will welcome students.

The finance committee will hold its first meeting Tuesday from 7-8 p.m.

“Ultimately it’s the students’ money,” Watson said. “We want to support what they are passionate about and what’s going to do good things for their organization.”