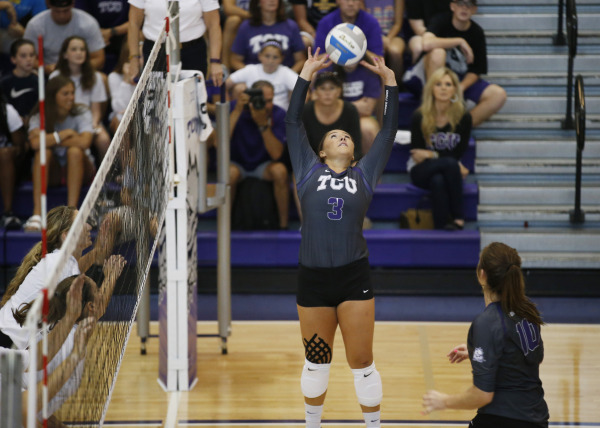 TCU Volleyball wrapped up its schedule at the SDSU/USD Invitational in San Diego, Calif. Saturday. The team swept the San Diego State University Aztecs before falling to the University of San Diego Toreros.

The team’s victory over San Diego State Saturday afternoon marked the first time the team had ever swept its first five opponents of the season. The team had previously broken the record on Friday when the Frogs swept Dartmouth College for four straight sweeps to begin the year.

The Frogs recorded 42 kills in the match against the Aztecs. They were led by junior Jillian Bergeson who totaled 12 kills.

“In the first set at the end, Jillian just absolutely put the team on her back and just ran with it,” TCU Director of Volleyball Jill Kramer said. “She did a good job there.”

Senior Blaire Pickens also had a strong outing with eight kills in the match.

Kramer praised her team for being able to execute necessary adjustments throughout the match.

“We had to mix up what we were doing and move the ball around really well to score,” Kramer said. “I think their outside hitters really started to pick apart our defense, so this match for us was the first time that we had to make true adjustments this season during the match, which I thought the team did a really good job of that.”

The Frogs’ winning streak would came to a halt when they were swept by the No. 23 University of San Diego Toreros just hours after defeating San Diego State.

The Frogs’ offense struggled, recording only 26 kills during the match.

Junior Ashley Smith had the strongest performance among TCU players in the loss, tallying eight kills, five blocks, and six digs against the Toreros.

“I think tonight we played a very good San Diego team at home and I think they came out really strong, served tough, blocked and defended well and our passing game broke down really early which affected us offensively,” Kramer said.

Kramer added that the team could use improvement handling adversity.

The Frogs exit the weekend sitting at 5-1 on the season and will return to action next weekend when they compete in the Allstate Sugar Bowl Collegiate Classic in New Orleans from Sept. 11-12.