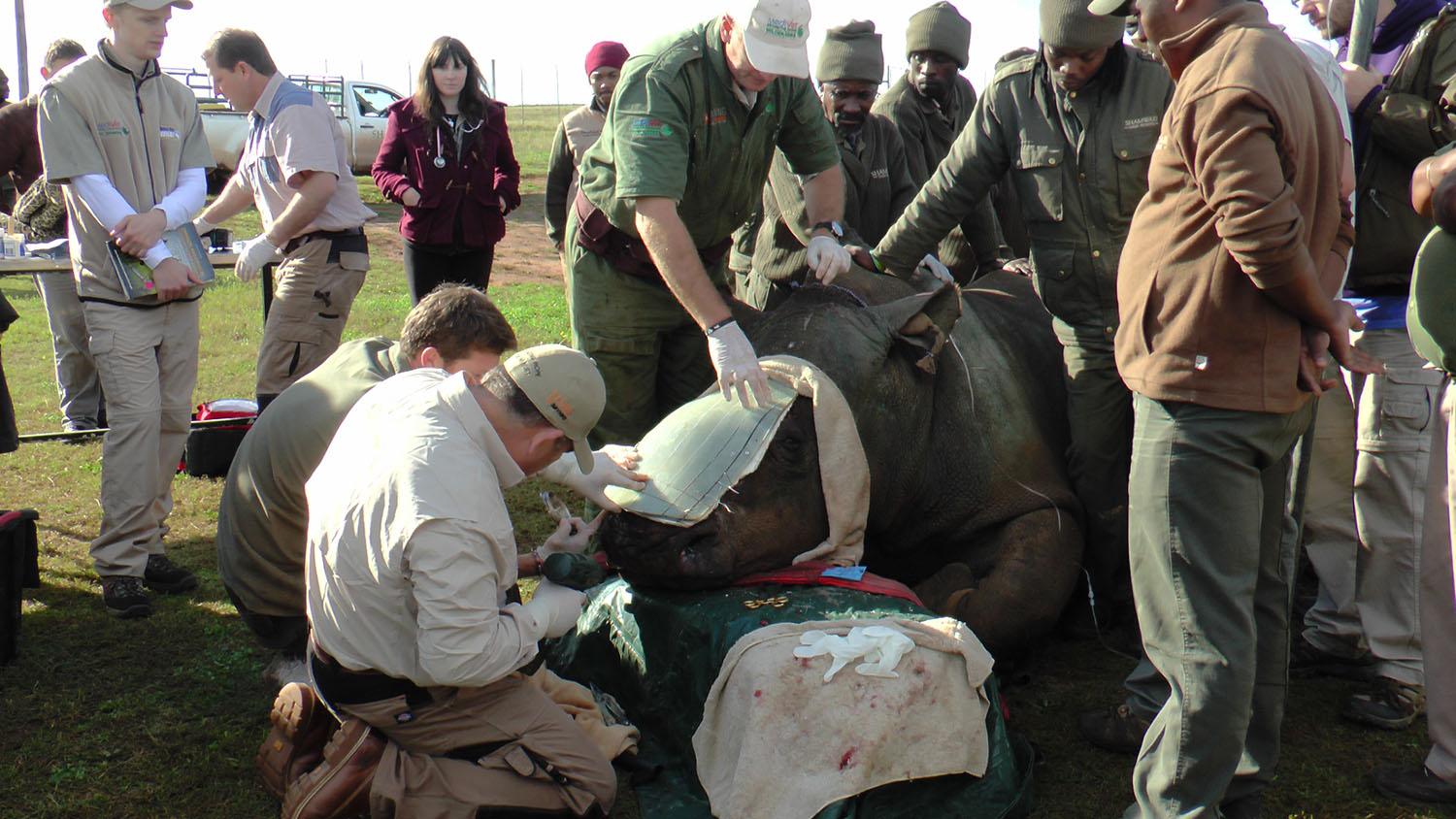 Although under sedation, she flinched as screws were drilled into her gaping facial wound to connect sutures in what was her fifth surgery.

Hope’s fifth surgery, just one of the attempts to rebuild her face, was done in July as 15 TCU students watched.

“I took the pulse of a dehorned rhino,” Wildlife Society President Sharra Blair-Kucera said in an email. “I watched a baby rhino play and then run and hide behind it’s dehorned mother.”

The students traveled to the Amakhala Game Reserve in South Africa to see the effects of rhino poaching. They returned to the states determined to bolster the Rhino Initiative, a partnership between the game reserve and TCU.

Michael Slattery, the director of the Institute for Environmental Studies, used a $25,000 grant through TCU’s Global Innovators Initiative which is part of TCU’s Discovering Global Citizenship program to start the conservation project.

“I knew I wanted to do something in South Africa and take students back to my home country,” Slattery said. “I knew wildlife trafficking was a huge problem globally, and I wanted someone who was working on the ground on wildlife issues.”

Through a friend of his brother, Slattery found Dr. William Fowlds, a wildlife veterinarian, who would become TCU’s main contact in South Africa for the Rhino Initiative.

Fowlds visited the campus in April 2014. He gave lectures and worked with students to create a multifaceted response plan to the rhino crisis.

“We lose more than three rhinos a day in [South Africa] that we know about,” Fowlds said in a Skype interview. “Animals like Hope are not even counted in the statistics because they survive.”

“Traveling to South Africa was a way for students to truly understand wildlife management in a geopolitical context,” Slattery said.

They visited Fowlds in South Africa and watched as he and his team cared for rhinos and wildebeests.

“The students were blown away,” James English, a co-chair of the Global Innovators Initiative, said. “It’s very hands-on. It’s not theoretical at all.”

The procedure on Hope was the epitome of real.

“That one was hard to watch,” said Sidney Dennis, a junior communication studies major. “Her eyes were open and being able to watch her eye move around and focus on other people was really interesting because you really saw the animal, like you saw she was actually there.”

“When poachers attacked Hope, they hacked off her horn, and took with it a significant portion of her face, sinuses and skull,” Haley King, a political science major who graduated in May, wrote on the TCU Global blog.

Fowlds said he and his team had trouble finding anchor points for a cover because so much bone was gone.

“While the TCU students were with us, we got halfway through the procedure and decided that attempt was not going to work, so we actually had to scrap that mask and try something else,” Fowlds said.

They sutured elephant hide, which is flexible, to her face. However, it only lasted two and a half weeks.

“We were looking for something that could sort of give when she tried to rub, because it must be extremely itchy for her,” Fowlds said. “We still haven’t come up with a solution.”

Fowlds added that with every failure, he and his team learn how to treat injured rhinos in the future.

“The sad reality is she won’t be the last one we have to deal with,” Fowlds said. “There will be more like her.”

Students meet once a week in a follow-up class to create TCU’s response to the rhino crisis.

“In that class we’re going to be working on maybe one or two other grants to provide other funding for them,” Dennis said. “We’re also working on some videos to show the greater TCU community.”

A main focus of the Rhino Initiative is to create a website, an insight into conservation activities and issues, Slattery said.

TCU has also donated a drone that is used for checking up on rhinos during the day, as well as for tracking rhinos that have already been darted before a medical procedure, Slattery said.

“Once you dart an animal you’ve got to make sure you know where it goes, because if it runs off into the bush and you don’t reach it within a certain time frame, it’ll die from the drugs,” Slattery said.

Students are also looking for ways to reduce demand for rhino horn, specifically in Vietnam and China. A belief that rhino horn can cure medical ailments, as well as the high price for the horn, drives the poaching.

Despite the rhino’s population decreasing, Fowlds said he is hopeful.

“There is this degree of helplessness and despondency that has been creeping into South Africans because we’ve been throwing everything we can at it for four years and the crisis just gets deeper,” Fowlds said. “So to have a project like what TCU has committed to on our side with the potential for it to grow for us is extremely motivating.”

Fowlds said the energy and concern the Fort Worth community is showing in the rhino project is invoking new hope in the fight for the rhino.

“I don’t want TCU to underestimate the impact that it will have,” Fowlds said. “It’s just this energizing effect that they are already having on our community.”

It’s an energy that can save other rhinos like Hope.

Space Age: A look into the world of digital entrepreneurship

Color theory: The meaning, history behind the colors that make an outfit work

The clash: The do’s and don’ts of mixing patterns