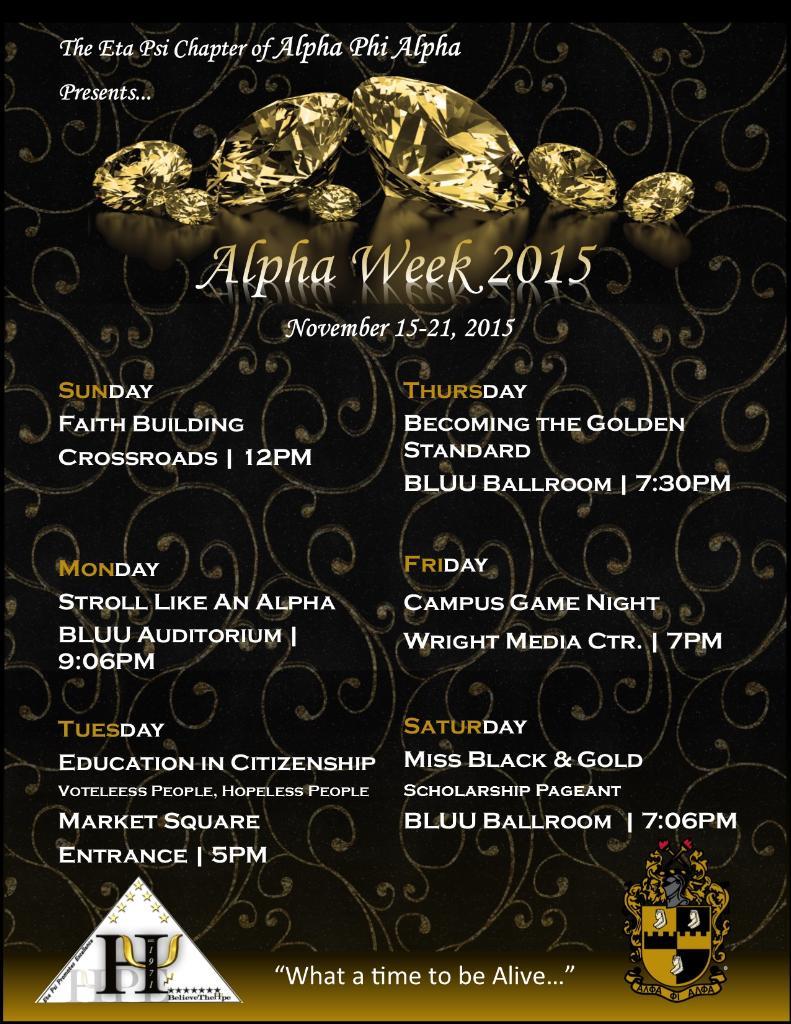 The fraternity wanted to give a positive experience to TCU students through the events it put on, senior mechanical engineering major and Alpha Phi Alpha president Courtland MacQueenette said.

Alpha Phi Alpha had a different event for students each day.

On Sunday the fraternity invited students to Crossroads Church to attend a service for a faith-building event.

On Monday Alpha Phi Alpha put on a Stroll Like an Alpha fundraising event. They placed women on TCU’s campus into teams and taught them how to stroll.

Each girl was asked to raise $50 for the Pinckney Group, an organization that aims to provide services and assistance for people with disabilities, MacQueenette said.

For the event Monday, the fraternity recruited a panel of judges that included Trevone Boykin. MacQueenette said the addition of Boykin wasn’t just a social pull but also a way to include athletes.

“It was a move that would allow our Eta Psi chapter to start breaking down those barriers between student athletes and students,” MacQueenette said. “Just allowing them to get that interaction with the social side of campus, because they kind of miss out on that.”

On Tuesday, Alpha Phi Alpha partnered with Lambda Theta Alpha Latin Sorority Inc. for an education in citizenship event. The groups set up at the entrances to Market Square to teach people about the upcoming presidential elections and to help them register to vote.

“We’re trying to alleviate that lack of knowledge about the topics,” MacQueenette said.

On Wednesday the fraternity partnered with all of the National Pan-Hellenic Council organizations to stroll and put on an Alpha Phi Alpha flash mob.

Thursday was Alpha Phi Alpha’s professional development day, Becoming the Golden Standard. The group brought a professional recruiter to come and give pointers for interviews and job hunts.

The fraternity also put on a game day in Wright Media Center and the Campus Commons on Friday afternoon.

David Jones, a senior psychology major and vice president and pageant chair for Alpha Phi Alpha, said the event is a way to celebrate the women of TCU and their accomplishments.

“The pageant itself is, first off, a scholarship pageant,” Jones said. “It’s a way for women of TCU to earn scholarship money. But it also highlights the women of TCU, praising them for their accomplishments, aspirations, high scholastic standards, as well as just being who they are.”

Shawn Williamson, a junior psychology major and Miss Black and Gold contestant, said participating in the event has given her more self-assurance.

“I actually saw this when I was a freshman, and I always wanted to be in it, but I was kind of scared,” Williamson said. “I’ve definitely gotten a more sense of confidence. I’m able to be comfortable in front of people doing things like dancing, speaking, things I probably never would have done before this experience.”