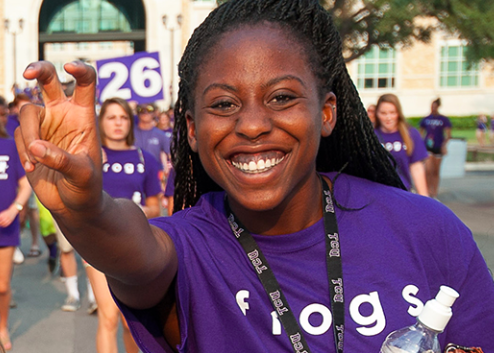 print
The now-open Frogs First leadership positions will give upper-division students looking to help incoming students transition to campus life an opportunity to do so.

“You get to be that first welcoming face when school starts,” said Andrew Bender, a junior entrepreneurial management major and Frogs First director.

Annie Bures, the coordinator for the first-year experience, said facilitators will learn how to lead small group discussions and develop their personal leadership skills.

“A lot of what we’re doing is focusing on leadership skills,” Bures said. “It’s a perfect leadership role to help you prepare for either other SDS leadership roles, or if you’re saying you want to be the president of your fraternity but you don’t know where to begin.”

The week before school starts in August, the program combines mandatory events such as the TCU Common Reading and the Chancellor’s Assembly with social events such as Frogs First Dinner, said Kim Turner, the director of student activities.

The schedule has been in place since 2011.

Before 2011 the program was known as Howdy Week and focused on social events that weren’t creating “a sense of relationship or community on campus,” Turner said.

Transfer students have the option of participating in Frogs First events with two tracks available to them.

Rachael Capua, the assistant director of the sophomore and junior year experience, said the two tracks created accessibility for transfer students who had prior commitments. One track is two days, and the other is the traditional four-day event.

The two-day track omits events such as the Chancellor’s Assembly.

Bender said he wants to encourage students who are looking for a low time commitment leadership position to apply.

“It’s like a stepping-stone level of leadership,” Bender said.

“They’re going to be helpful to first-year students no matter what happens,” Bures said.

Frogs First is scheduled for Aug. 18-21. Students can apply for a leadership position on OrgSync.