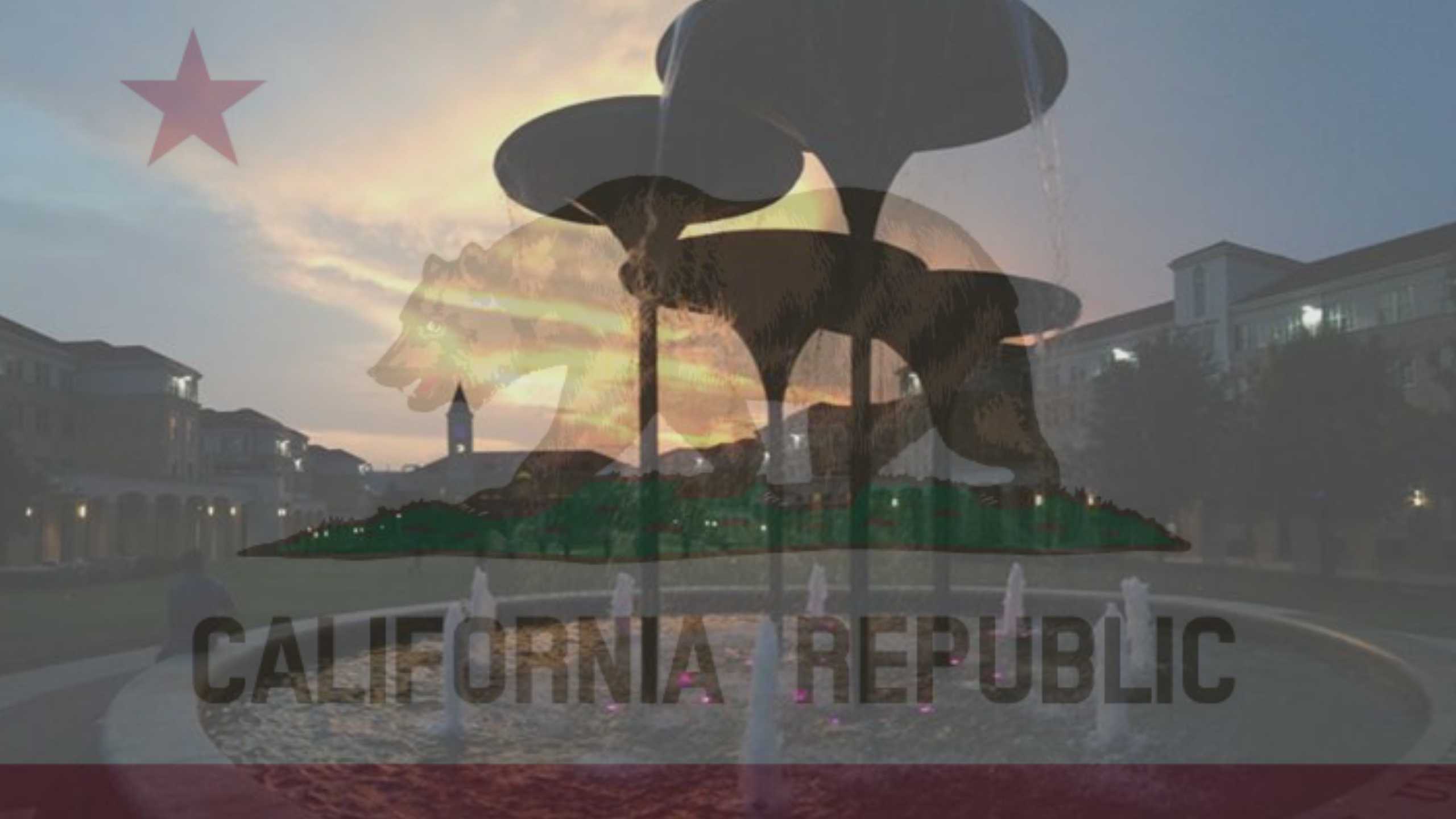 TCU junior Dominick Signoretto came to TCU from his hometown of La Quinta, California, hoping to experience an entirely new lifestyle in the state of Texas.

Signoretto’s hope was largely realized. Located more than 1,200 miles away from La Quinta, Fort Worth is a change of scenery from the dry desert climate of the Coachella Valley in Southern California.

“I had narrowed my choices down to the University of Southern California and TCU, and I decided I really didn’t want to live in downtown Los Angeles,” Signoretto said. “I thought TCU would be a great fit, plus I have family nearby in Dallas.”

Signoretto may have physically left California and all it encompassed, but he was in for a surprise upon his arrival to campus in Fall 2013 — 304 others had joined him in departing the Golden State to become Horned Frogs that school year.

“At first, I was shocked because there were so many Californians here. It’s very ironic that here I left California for something new and the state essentially followed me here,” Signoretto said.

The group of 304 Californians easily led the out-of-state charge among the 1,934 first-year students at the university that fall, beating second-place Illinois by an overwhelming margin of 227 students.

And by recent trends, it’s not an anomaly.

California has become an unprecedented driving force in out-of-state admissions at the university. Its dominance has grown out of proportion, leading nearly every statistical category imaginable at the university when it comes to non-Texan students and applicants.

Dean of Admissions Ray Brown said the explosion of the California student population at the university has been a trademark of a campus that has grown in so many ways this decade.

“It’s been exciting. The influx has been a microcosm of what is going on [at] this university,” Brown said. “We now have more Californians than any other school in Texas.”

In a broader picture, the California applicant rate at the university experienced a whopping 1,019 percent increase from 2003 to 2013, as only 214 applications were received from Californians for the fall 2003 semester. 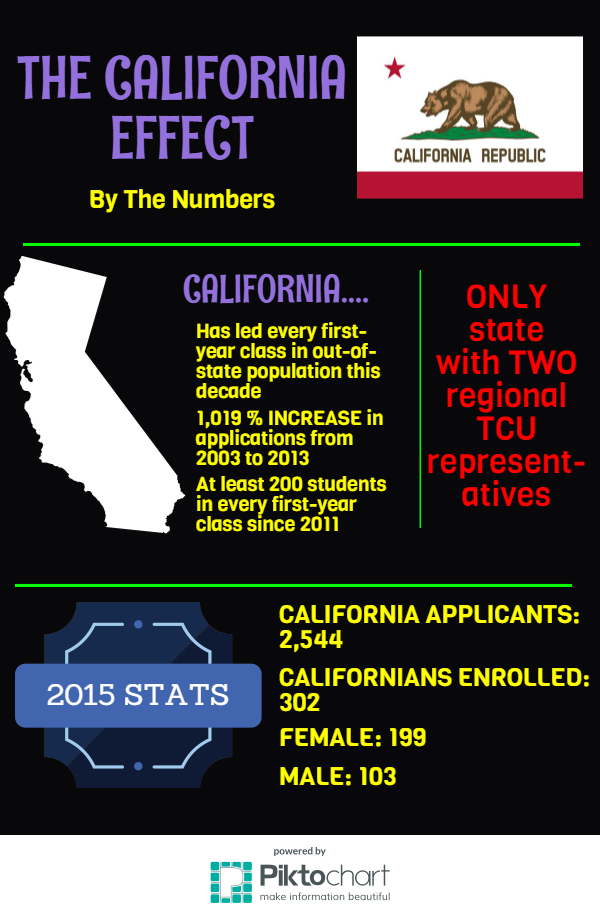 Brown said the phenomenon of the university’s popularity in California can be attributed to many factors, but the biggest is likely national exposure from university athletics, particularly football.

“If you had to point to any one thing that began the shift, it had to be the Rose Bowl win in 2011,” Brown said. “We were such an underdog playing Wisconsin and we beat them. The people of California were amazing to us during that week, and ever since then the California population at TCU has exploded.”

According to data from the office of admission, the number of first-year students from California jumped from 148 in 2010 to 200 in 2011 following the Rose Bowl victory. Meanwhile, the total number of applications jumped from 14,079 to 19,166 in the same time period, a 36.2 percent increase.

Brown added that the desire to experience the Texas culture may also serve as an explanation for a rising interest of the university among Californians.

“The Californians we get here are ones that we sense have closer to middle-American values than maybe the traditional Californian may have,” Brown said. “There are many of them for whom Texas may be interesting, but not off-putting.”

Signoretto was one of those Californians intrigued by the way of life in Texas.

“They say Southern Hospitality is a real thing in Texas, and I agree” Signoretto said. “People hold the door open for you and want to speak with you here, whereas in California it’s not the case all the time.”

On top of those factors, Director of Freshman Admission Heath Einstein, a California native, said the state itself has played a role in the mass exodus of college students, particularly the condition of its public universities.

“Even the best students in California are having trouble getting into the UC schools and Cal-State schools because of in-state versus out of state tuition. It’s probably easier for a Texan to get into one of those schools because they want more money from the out-of-state students,” Brown said.

With the ever-growing number of California students headed to TCU, the university has even sought to increase its presence out west by adding a second regional representative in the state.

“It’s sort of a chicken and eggs scenario,” Einstein said. “We realized more and more students were visiting from there, so we decided we needed to a have a bigger presence out there. We now have a Southern California and Northern California based regional representative.”

The influx of students from California can also bring implications much larger than the state’s representation among the student body.

The university attempts to keep class sizes around 1,800 students. As Californians and other out-of-state students grow in numbers, it inevitably means a decrease in the number of Texans at the university.

While Texas remains the leader by student population, the presence of in-state students has tumbled in the same time frame that California students have skyrocketed.

Brown said the rapid decline of in-state students is a feat that very few admissions workers witness at any institution.

“The in-state student decline that we saw happen here in five years would be very unlikely for an admissions officer to see in a span of forty years at any other institution,” Brown said.

Some people such as Signoretto feel that the coincidental rise of Californians and decline of Texans has also shifted the culture of the university and surrounding community away from a traditional Texas feel.

“It’s kind of odd. I left California to escape that culture and learn something new, and now it seems it’s being engulfed into the TCU culture,” Signoretto said. “People bring their clothing styles, music styles, and other tendencies with them. I see even more liberal views here since California is a more democratic state.”

It’s not just Californians that perceive cultural effects on and around campus from their presence. Adam Powell, a senior from Leander, Texas, said he has sensed the California presence on campus since he was a first-year student in fall 2012.

“I lived in Sherley Hall freshman year, and it seemed like nearly every person I talked to in the dorm was from California,” Powell said. “I talked to so many of them that went to all girls or all boys high schools, and that was something I had never heard of in Texas. Even seeing so many students skate-board around campus is something different.”

While some Texans at the university may take issue with students from a single state dominating the out-of-state student population, Powell said he has a unique perspective among Texans regarding the situation.

“I think it’s an awesome thing to see California’s influence grow,” Powell said.  “Being from the Austin area, I’m from a part of Texas that has a more similar feel to California than the rest of it, so it’s neat having a culture here that I can sort of relate to. It’s interesting though people from the Dallas-Fort Worth area take it a little bit differently than I might.”

Powell said while California students at the university bring their tendencies to Fort Worth, he feels the cultures of each place coexist rather than blend together.

“I’m a firm believer that diversity is always a good thing, but the California culture doesn’t mesh as clearly with Fort Worth’s culture. Billy Bob’s is not the kind of place that would be popular in California like it is here,” Powell said.

Powell said what does stand out are the large numbers of students flocking to venues in Fort Worth that may otherwise have been less popular among native Texans.

“Lots of students hang out at the coffee shop Brewed, which is very laid back and the kind of place you would find in California,” Powell said.” I think more students are spending time at places like Brewed where they feel a connection, opposed to a place such as Ol’ South Pancake House, and I think places like Brewed do hinge on a diverse population at TCU.”

As the university strives for diversity, some may express fear that continuing to bring in so many Californians will hurt rather than help the cause. Einstein said the university is mindful of the numbers but does not see any concern at the moment.

“We look at the numbers, and if we ever saw a trend where the number of Californians alone was approaching that of Texans at the university then we might approach things a little differently,” Einstein said. “Right now we’re looking for the people that match the character we want to see in TCU students and can influence the campus in a positive way, regardless where they are from.”