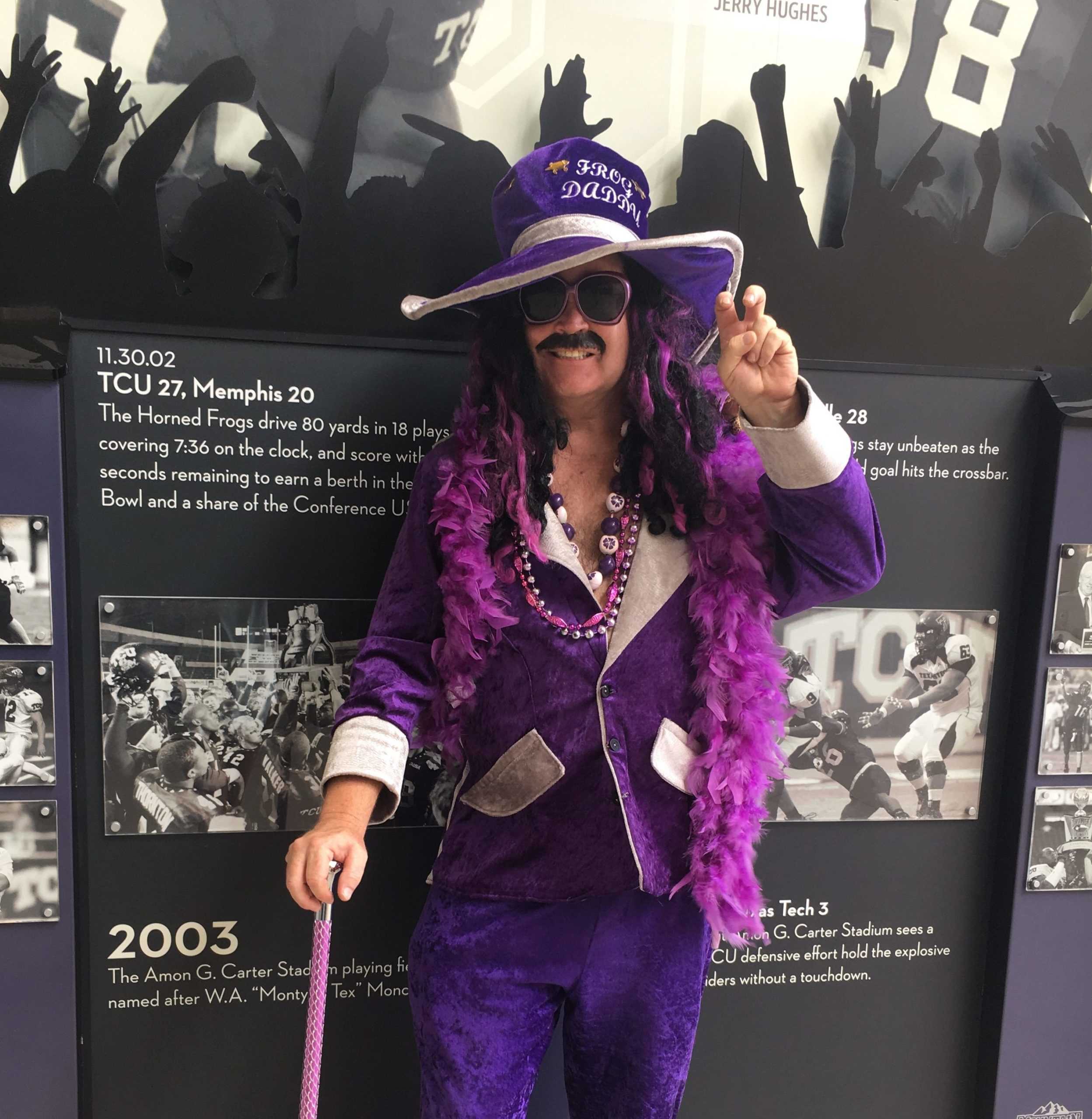 A father, scholar of prestigious academia and a man with the purest of hearts can be spotted wearing a snazzy purple suit every Saturday during Frog football season.

If you have been to a TCU football game within the past eight years, you’ve probably seen him. He is the man who appears to be the biggest TCU fan.

Clothed in a purple velvet suit, draped in TCU beads, layered with a boa and topped off with a customized hat and cane, “Frog Daddy” is the unofficial mascot of the TCU Horned Frogs.

TCU 360 ran into Frog Daddy and his family at the annual Meet the Frogs event and wanted to further investigate this extraordinary Frog fan.  Underneath the luscious wig and gaudy 70’s suit is a man named Jim Vaughan.

Earning degrees in 1982 and 1995, Vaughan is a double alumnus of Texas Christian University and has been a season ticket holder to Horned Frog football games for more than 30 years. He has a passion for the team in purple and said football season is like Christmas to him.

“Frog Daddy is about spirit,” said Vaughan. “I’m just trying to get people up on my spirit level.”

But where did this ornate costume come from?

On Halloween in 2009, TCU was scheduled to play University of Nevada-Las Vegas. Vaughan and his family were at a costume shop before the game and his daughter encouraged him to sport the purple ensemble. Frog Daddy became a hit and continued on for the next eight years.

Vaughan also explained that his pseudo-personality is about sportsmanship. He said when other teams come to Amon G. Carter Stadium, he wishes them luck and welcomes them with wide, open arms.

Vaughan stressed sportsmanship went beyond the game and stretched to the community.

“I just really want people to be exuberant about TCU spirit,” said Vaughan.

With Vaughan’s social work background, he also explained how he incorporates his philanthropic work with his purple bearded character.

“God has given me a servant’s heart and that is where I am professionally as a social worker,” he said.

Vaughan’s nephew, Gerald White, has devoted his graduate studies at Texas Tech University to Frog Daddy. In his work, he compares Frog Daddy to a superhero seeing as the man behind the disguise generates a certain level of mystique or intrigue within the public eye.

Frog Daddy is a reversed superhero. When he is out on the field, he is just a loud, crazy fan. When he is in his professional, work attire he is truly a gift to his community. Below is a list of everything in which Vaughan is involved:

To see more about him, follow his social media accounts @frogdaddyTCU.

Sierra Tuthill is a junior journalism major and film, television & digital media minor. She is the staff writer for the109.org. Sierra is the co-captain of the TCU Showgirls and loves country music, diet coke and the TCU Horned Frogs!