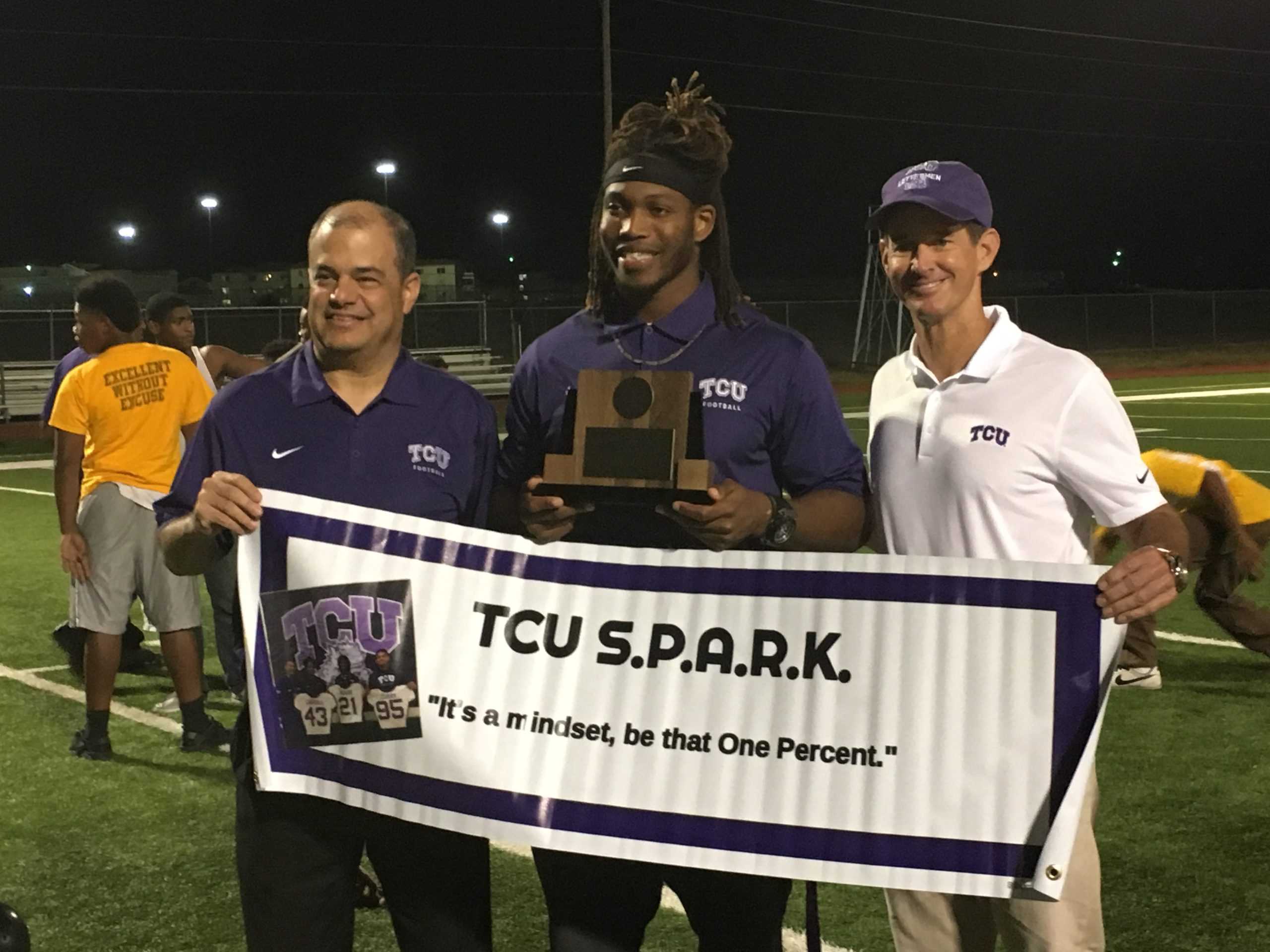 print
TCU senior defensive back Caylin Moore thought he was at O.D. Wyatt High School on Fort Worth’s east side Monday night to stress the importance of education to student athletes.

But, instead of encouraging student athletes Monday night, Moore received special recognition for his dedication and commitment to his service to the community. Moore was awarded a plaque, naming him to the 25th anniversary Allstate AFCA Good Works Team.

“I had no clue, it’s so humbling, I just thought we were at the school to speak to the kids,” Moore said.

Moore said it seems natural to use his status as an athlete to encourage others by talking about his life.

Moore and other TCU players have created a foundation – Strong Players Are Reaching Kids or S.P.A.R.K. – that visits schools throughout DFW to talk to student athletes about crucial times in their lives.

“I have a 100 percent responsibility to tell my story,” Moore said. “What I can do encouraging others intellectually far outweighs me dancing in the endzone.”

Moore’s childhood includes being homeless for a time after his mother “left a volatile home,” according to a press release from Allstate.

Moore said the message he shares far outweighs the nerves he sometimes has when it comes to public speaking.

“When I get up and speak, something comes over me and I become a different person,” Moore said.

Moore said that it’s about using your platform as an athlete and inspiring kids to be able to do something.

However, S.P.A.R.K doesn’t just affect the youth outside of TCU. He said seeing his teammates and other students on campus develop on campus as leaders is a tremendous joy.

“I feel like I have an important piece to share with the kids, but I’m always impressed with what my teammates have to say,” Moore said.

He started his college football career at Marist College, and that is when adversity hit.

While he wasn’t playing football at Marist, Moore worked as a janitor in order to make money to continue his education.

“Being a janitor showed me that no matter what I do, I must do it to the best of my abilities,” Moore said.

After Marist, Moore went to Princeton University for a pre-graduate program and studied education and public policy, which sparked his interest in the field.

After transferring to TCU in 2015, Moore found himself on the football field once again.

Moore said his football career has been a blessing.

“By way of God, I ended up at TCU, playing football,” Moore said. “I’m not even supposed to be here right now and I made it happen.”

Even with the heavy time commitment of playing football, Moore continues to make time for community service.

“Honestly, no matter what happens, my impact now as a man here will be far greater than my playing time,” Moore said.

Moore’s teammates have taken notice of his passion.

Wide receiver Michael Carroll said that Moore is dedicated to everything he does and his attitude and mentality is contagious.

“It’s just a blessing to be around that guy,” Carroll said.

After graduation, Moore said he wants to continue giving back to the community. He said he has seen how education can change lives and he wants others to feel those effects as well.

“I want to work in educational policy and public policy so that I can ameliorate certain situations for disadvantaged youth, especially people of color,” Moore said.

Moore will be recognized along with the other 25 members of the Allstate AFCA Good Works Team at the Sugar Bowl.