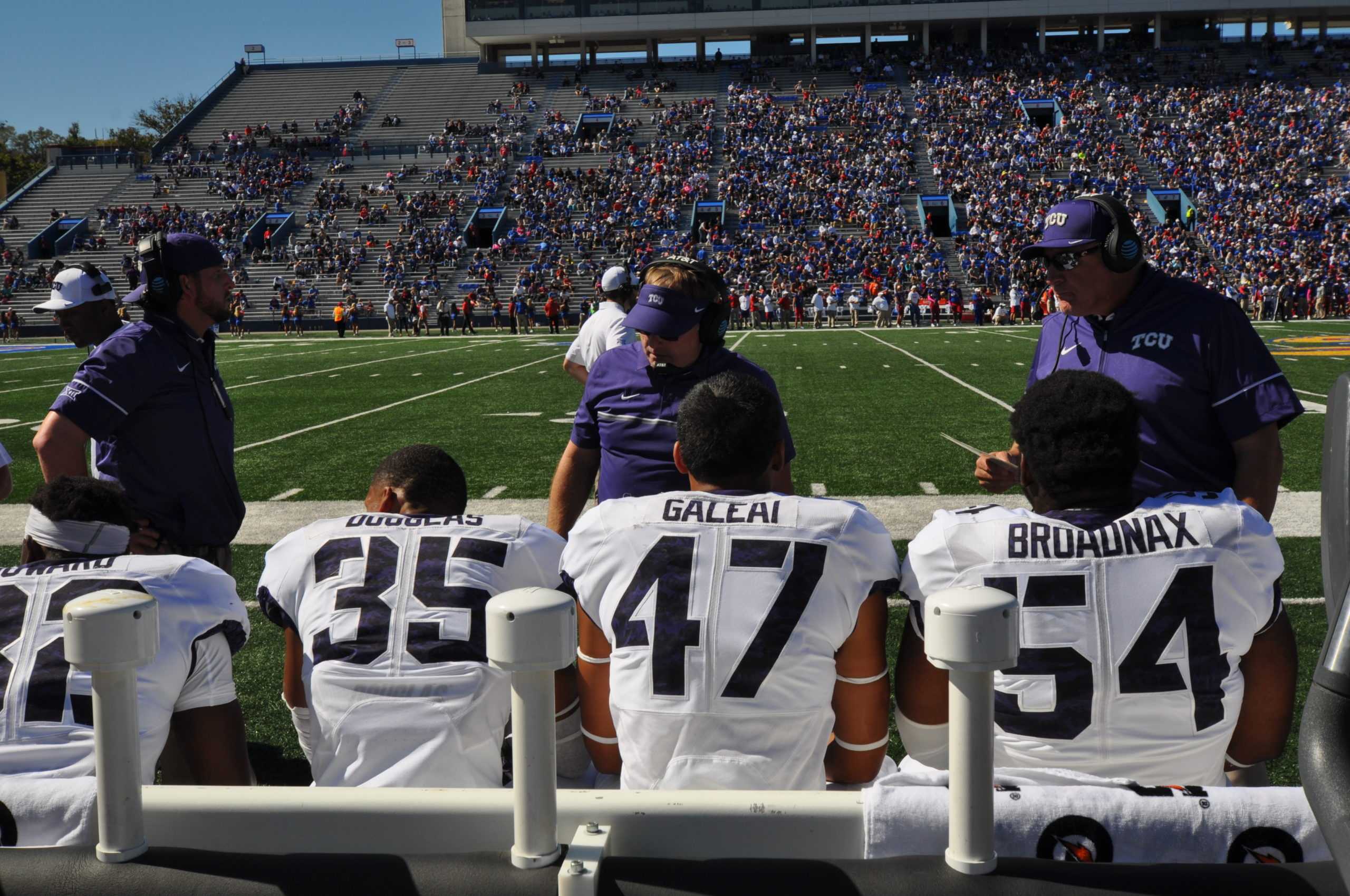 print
TCU and Kansas battled back and forth in a sloppy, defense-dominated contest Saturday afternoon, but the Frogs survived, 24-23 after the Jayhawks missed a 54-yard field goal with two seconds left. All five Big 12 meetings have been decided by 14 points or less. TCU now holds a 21-8-4 series advantage over KU.

Here are five takeaways from the Frogs’ performance.

TCU head coach Gary Patterson said that Kenny Hill and the TCU offense needed to limit their first half mistakes. That was not the case in the first 30 minutes in Lawrence. Both of the Horned Frogs’ first two drives of the game ended in quarterback Kenny Hill turning the ball over.

On the first drive of the game, Hill misfired on comeback route to Jaelan Austin, and Jayhawks cornerback Brandon Stewart picked off the pass.

On the very next drive, TCU right tackle Aviante Collins got beat around the edge by Kansas defensive end Dorance Armstrong Jr., who then hit an unsuspecting Hill. Armstrong Jr.’s blindside hit resulted in a fumble by Hill, which ended up in the hands of Jayhawks defensive end Damani Mosby for Hill’s second turnover.

In the second half, Hill threw two more interceptions. However, one of them was not his fault, as his pass was deflected up into the air and then caught by a member of the Jayhawk secondary.

For TCU to win by more comfortable margins, they’ll need to cut down on their mistakes.

Defense has been an issue for the Horned Frogs all year, but they were not the problem Saturday. The Horned Frogs have picked off Kansas’ new starting quarterback Ryan Willis three times, with linebacker Travin Howard intercepting a pass in the first quarter, and safety Nick Orr picking off Willis’ passes in both quarters, in addition to a Matt Boeson forced fumble and another Nick Orr interception.

Orr is the first Horned Frog with two interceptions in a game since Sam Carter at Texas in 2014.

Josh Carraway totaled a game-high and career-best three sacks, including two on the final drive. Carraway now leads TCU with 4 1/2  sacks on the season.

If the Horned Frog defense continues their dominance, it won’t matter how many points Hill and Co. score.

TCU running back Kyle Hicks is the only player with both 300 yards receiving and rushing in the nation, and he picked up the Horned Frogs’ first touchdown on a three-yard plunge. Hicks has also picked up a handful of third-and-shorts that have kept TCU drives going. He finished the game with 104 yards rushing on just 18 carries, good for 5.8 yards a touch.

Hicks surpassed the 100-yard mark for the second time in his career.

Look for the Horned Frogs offense to feature Hicks the rest of the season.

After struggling in the first half against Arkansas and SMU, Kenny Hill’s first half woes have continued against Kansas. His two turnovers, plus a number of overthrows and inaccurate passes have held the TCU attack back against the Jayhawks. However, he did have an 18-yard rushing touchdown that gave the Frogs their 14-10 halftime lead.

Kenny Hill’s 18-yard scoring run was his seventh rushing touchdown of the season, tying him with Hicks for the team lead.

In the second half, Hill picked up more yards through the air, finishing with 206 yards, but just the lone first quarter touchdown pass to Jaelan Austin.

Austin’s 25-yard touchdown reception from Hill marked his third straight game with a scoring grab. He now has four on the season and six in his career.

In order for the offense to develop more consistency, Hill needs to be more accurate on his short to intermediate throws, which will give the Frogs more rhythm on offense.

Despite TCU forcing four Jayhawk turnovers, Kansas led TCU in time of possession by more than 10 minutes, 35:07 to 24:53. The Horned Frogs’ offense needs to hold onto the ball longer in order to shorten games and ease the burden on Kenny Hill and the offense.