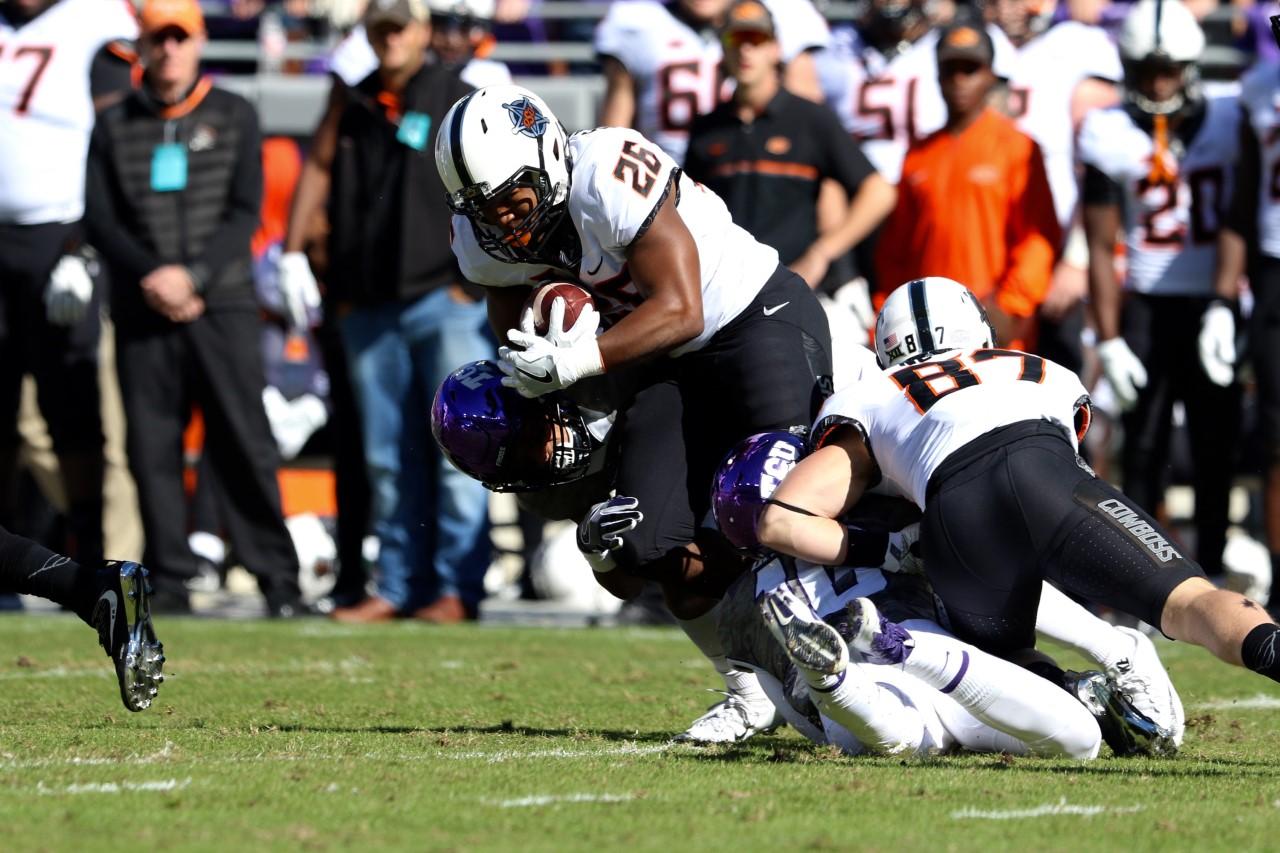 “I’ve got to give Coach Gundy and his team credit because they kicked our butts,” Patterson said. “I’m embarrassed for my players and for myself.”

The 25-point loss was the worst loss under Patterson.

Here are five things to know about Saturday’s contest between the Horned Frogs and Cowboys.

One game after Hicks rushed for a career-high 192 yards and five touchdowns, the Cowboys made it clear that they would rather any other Horned Frog do the heavy lifting for the TCU offense. Hicks had 25 carries for 47 yards. Hill threw his Big 12-leading 11th interception to an Oklahoma State defense that leads the conference in interceptions forced with 12. TCU just couldn’t find any rhythm on Saturday.

2. Oklahoma State’s top-flight passing game broke out in the second half

OSU quarterback Mason Rudolph had the fifth-most passing yards in the nation heading into Saturday’s game. However, against TCU Rudolph has just 84 passing yards. One reason for TCU’s successful first half pass defense is that they were able to generate pressure. In the first half, TCU sacked Rudolph twice and forced a number of hurried throws. In the second half, it was a different story. Rudolph finished the game with 207 yards passing and a touchdown. Even though TCU allowed 31 points, the defense wasn’t terrible. They were always in position to make plays, but tackling issues were their undoing.

3. Kenny Hill unravels in the second half

Against Baylor in his last game, Hill threw for 244 yards, a touchdown and no interceptions. After the first half against OSU, he had 65 yards passing and a touchdown. In the second half, Hill reverted back to erratic throwing patterns, as he threw two interceptions in the last 30 minutes. He leads the Big 12 in interceptions thrown with 12.

“On the last drive of the game when OSU had the ball, we got three guys run over,” Patterson said.”You have to decide if you want to be a football player, simple.”

On TCU’s last offensive play of the first half, it had fourth and goal from the one yard line. Instead of running out a traditional offense, TCU opted for a wildcat attack with running back Hicks taking the snap and Hill on the sidelines. Hicks faked a handoff and threw an incomplete pass to tight end Cole Hunt that ended the Horned Frogs’ drive without any points scored.

“I think it hurt us a little bit, and it would’ve made a difference going into the half up 13-10,” Patterson said. “We worked on that play a lot and all we had to do was execute.”

“It was a pass-option, and I tried to do my best to deliver the ball to Cole [Hunt], but I failed,” Hicks said.

At the beginning of the fourth quarter, TCU had the fourth-and-one on the OSU five-yard line, and they opted to run wildcat formation with Hicks at quarterback, which resulted in no gain and a turnover.

“Why not?” Patterson said when asked about why he continued to use wildcat formations.

His running back had no problem with the wildcat either.

“You get to be patient and read your blocks,” Hicks said. “I was comfortable back there.”

TCU’s next game is in Austin, Texas on Nov. 25 against the Texas Longhorns. Kickoff is set for 2:30 p.m.