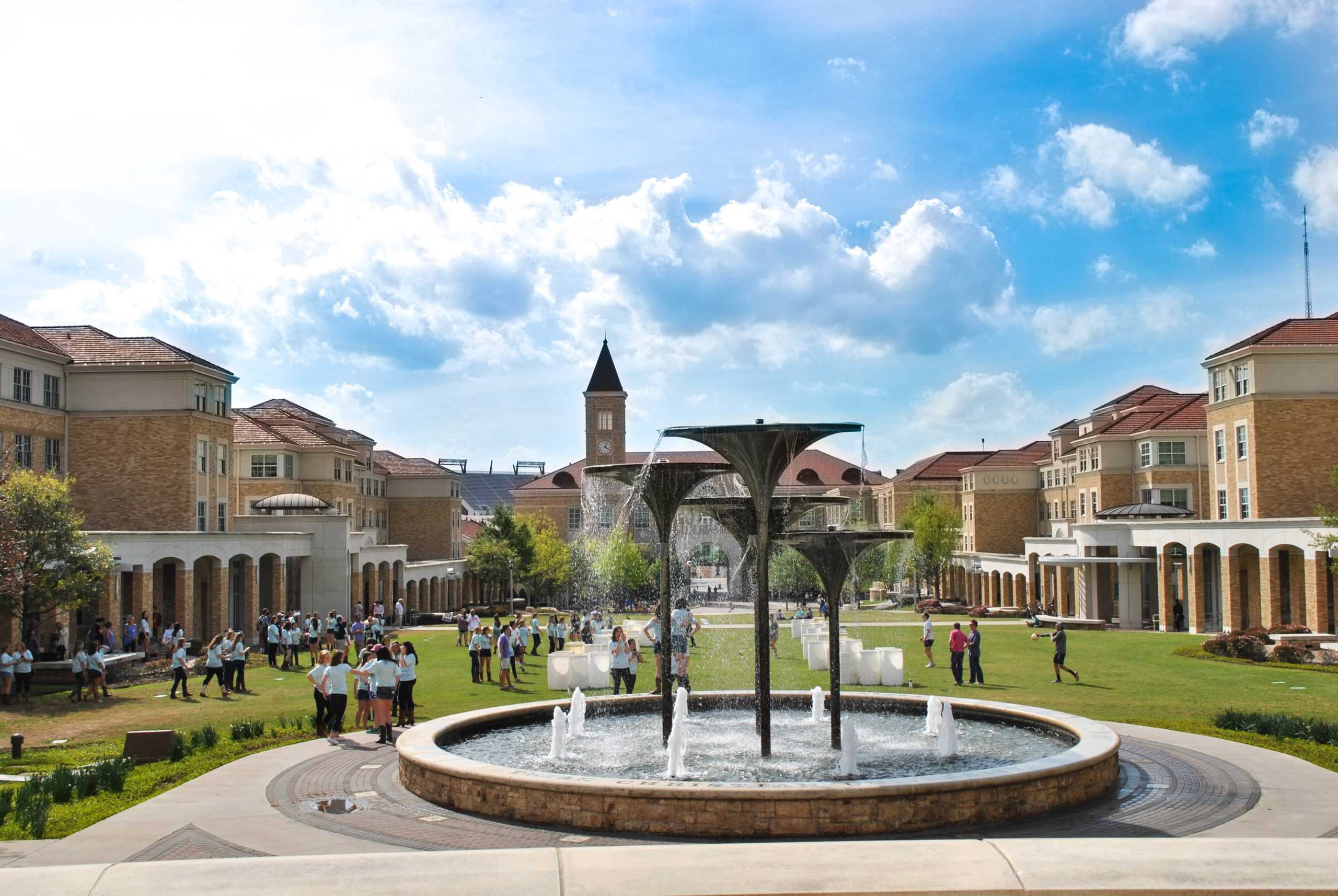 print
While some college students enjoy sitting at the back of their classrooms, junior Chris Dorr sits at the very front. Dorr receives preferential seating in order to accommodate his learning disabilities, attention deficit disorder and attention deficit hyperactivity disorder.

“During quizzes and other assignments, if I see people it kind of makes me anxious, like ‘Oh, they’re finished, why am I not finished?’” he said.

Dorr is one of 404 TCU students currently receiving an accommodation for a learning disability.

According to the 1990 Americans With Disabilites Act, a learning disability is a “neurologic disorder that causes difficulties in learning that cannot be attributed to poor intelligence, poor motivation or inadequate teaching.”

TCU Student Disabilities Services provides various accommodations for students with learning disabilities — which range from extended time on tests to recorded class lectures — based upon approved documentation verifying “the existence of a disability.”

“This is about access,” Ramsey said. “If there are barriers, then we’re trying to determine how to remove those barriers so students can demonstrate what it is they know or what they learn.”

Student Disabilities Services was not present at TCU until 1993, with the passage of the Rehabilitation Act of 1973. Section 504 of the legislation prohibits discrimination against individuals with disabilities.

TCU complies with Section 504 of the Rehabilitation Act of 1973, which prohibits discrimination in education against individuals with disabilities.

Attaining success at TCU — and academic life in general — may have been tougher for students with learning disabilities prior to the department’s existence.

“It might also have been that students with a learning disability at that time didn’t wind up going to college because their kindergarten through 12th grade material was so difficult, and if they didn’t know what was wrong, they might just think ‘I’m not college material,’ and decide to go another route,” she added.

It also may have taken students with learning disabilities longer to graduate, longer to study and/or the need of extra tutors and support all over campus for whatever class they were struggling in, said LaShondra Jimerson, a disabilities specialist in TCU’s Student Disabilities Services department.

Moore also said she believes more students with learning disabilities are in college now because they’re more capable of handling it.

The first testing for learning disabilities was in the late 1890s, then testing was done after the first World War I soldiers returned from war in the early 1900s finding they could no longer function using the same academic skills they used prior to the war, Student Disabilities Services Coordinator Laurel Overby said.

An increase in students with learning disabilities attending school and pursuing higher-level education came out of the Civil Rights movement during the 1940s, 1950s and 1960s.

“When parents want something for their kids, they tend to have a lot of power,” Moore said. “So once it got started, you saw people jumping on the bandwagon and the country got lots of legislation — we got the Education for Handicapped Children Act, we got the Architectural Barriers Act, and by 1990, we got the ADA, which is the most comprehensive piece of legislation ever for people with disabilities.”

Overby said not much attention was given to disabilities until the 1980s and 1990s, with dyslexia being at the top of the list.

“Disability falls under civil rights,” Overby said. “It was finally given a voice.”

Some TCU students with learning disabilities say that the assistance from the Student Disabilities Department has helped them greatly.

Dorr, a strategic communication major, stressed the importance of his accommodations.

“If I didn’t have my extended [test] time, I’d probably fail out of TCU,” he said. “And if I wasn’t able to type my notes, I don’t know how I’d be able to take notes on paper without getting distracted.”

He also said he feels like he wouldn’t be as successful at TCU without the existence of the Student Disabilities Services department.

“I think for only one or two of my classes I haven’t needed to use extended time on exams, and that’s just one to two classes. This is my first semester of my junior year, so I’ve used a lot of my extended time,” Dorr said.

Regan Arnold, a junior entrepreneurial management major, was diagnosed with dyslexia and ADHD in fourth grade. She says a large reason she chose to attend TCU is because of the university’s accommodations for students with learning disabilities.

“I have worked really hard to overcome my learning disability, so I think that I can be successful on my own, but the fact that they have the resources here really played a part in why I came here,” Arnold said.

However, only 17 percent of college students with learning disabilities take advantage of “learning resources at their school.”

Trey Fearn is a first-year Film, Television and Digital Media major who says he has a fine motor skills deficiency as a result from concussions during high school. He said he has difficulty processing information and takes longer time to read.

“If you give me a Scantron, I can have the answer in my head, but the actual act of bubbling it would take me a while,” Fearn said.

He said he has not yet utilized the Student Disabilities Services to acquire assistance for his learning disability, nor has he told any of his professors of it.

“So far, I’ve been doing just fine without it, but I will 100 percent start using the accommodations throughout college,” Fearn said.

According to a study done by the National Center for Learning Disabilities, the three factors most attributed to success post-high school for students with learning disabilities are a supportive home life, a strong sense of self-confidence and a strong connection to friends and family.

Other factors associated with success for students with learning disabilities include: early support for learning and attention issues, planning a smooth transition from high school to college or other post-high school endeavors, supportive teachers, facilitating relationships with mentors and participating in extracurricular activities.

Junior child development major Antoinette Shrewsbury said that support from others has helped for her to cope with ADD, dysgraphia, fine motor skill issues and an auditory processing disorder.

“For years, I always felt embarrassed about the many learning disabilities I’ve had to deal with,” Shrewsbury said. “But now, thanks to my parents, teachers and academic counselors, I couldn’t be prouder of my academic achievements and success in school.

“My parents never allowed me to use my impairments as a crutch to feel sorry for myself, which used to drive me up a wall,” she added. “But now, I can’t thank them enough for never allowing me to give up on myself and for pushing me to be the best student I can be.”

But what happens to a student in the “real world” who has a learning disability? The accommodations may look different than what the students are used to during college, but there are still accommodations.

The Learning Disabilities Association of America, in compliance with both the Rehabilitation Act of 1973 and the 1990 ADA, states that employers covered by either law “make reasonable accommodations for qualified individuals with impairments that substantially limit a major life activity, such as learning.”

It also states that achieving success in the workplace is a two-way street, and that both individuals with learning disabilities and employers should “work together for their mutual benefit.”

Students who have learning disabilities and receive accommodations at TCU may also take advantage of such resources in the workforce as well.

Ramsey said it’s important that once a student who has a learning disability enters the workforce, he or she learns how to self-accommodate.

“If your boss comes to you and gives you a deadline, you don’t get to go to your boss and say, ‘You gave me a week to do this, I’m going to need a week and a half,’” Ramsey said. “The individual has to figure out how they’re going to meet their deadline, whether that means working later hours, working longer or breaking the item down into little pieces.”

She also said that with the advent of technology, there are a lot of things that can help individuals with disabilities, especially learning disabilities, to be successful.

“If a student needs a note-taker, your employer is not going to provide that for you, so you may have to do things like record on a laptop,” Ramsey said. “It’s nice to have the technology that we have now.”

Some TCU students who have learning disabilities also said that they’re not worried about the possibility of not receiving the same accommodations in the workforce that they’re used to receiving at TCU.

“ADHD only affects me when I am being tested on subjects I do not enjoy,” senior engineering major Diego Padilla said. “I know that in the real world I will be doing what I am passionate about, so it does not worry me at all.”

“Personally with myself, things that I enjoy are things that I know and understand more,” Arnold said. “Things I hope to do in the workforce are not things that my learning disability will necessarily play a part in.

“With my ADHD and distraction, and my dyslexia and reading things, I don’t think those things will necessarily play as big a role in my life when I get out of college because it’ll be more things that I’m wanting to be doing,” Arnold added. “So I don’t know if accommodations in the workforce will necessarily be needed, personally for me.”

How does TCU compare?

“I don’t think that’s a place we’d ever go because we don’t want to nickel-and-dime students to death,” she said.

TCU also has the Koehler Center for Teaching Excellence on campus, which works with faculty in order to teach them how to teach effectively, which certainly benefits students with learning disabilities.

“The more ways you can present the information the better; when you bring in information using several modalities, you’re using more of your brain, so good teaching strategies in general benefit all students,” Ramsey said.

Ramsey said that when TCU Student Disabilities Services works really well, “students come here, they get the access that they need and they graduate.”

The end year of World War I was incorrect in earlier versions of this post.