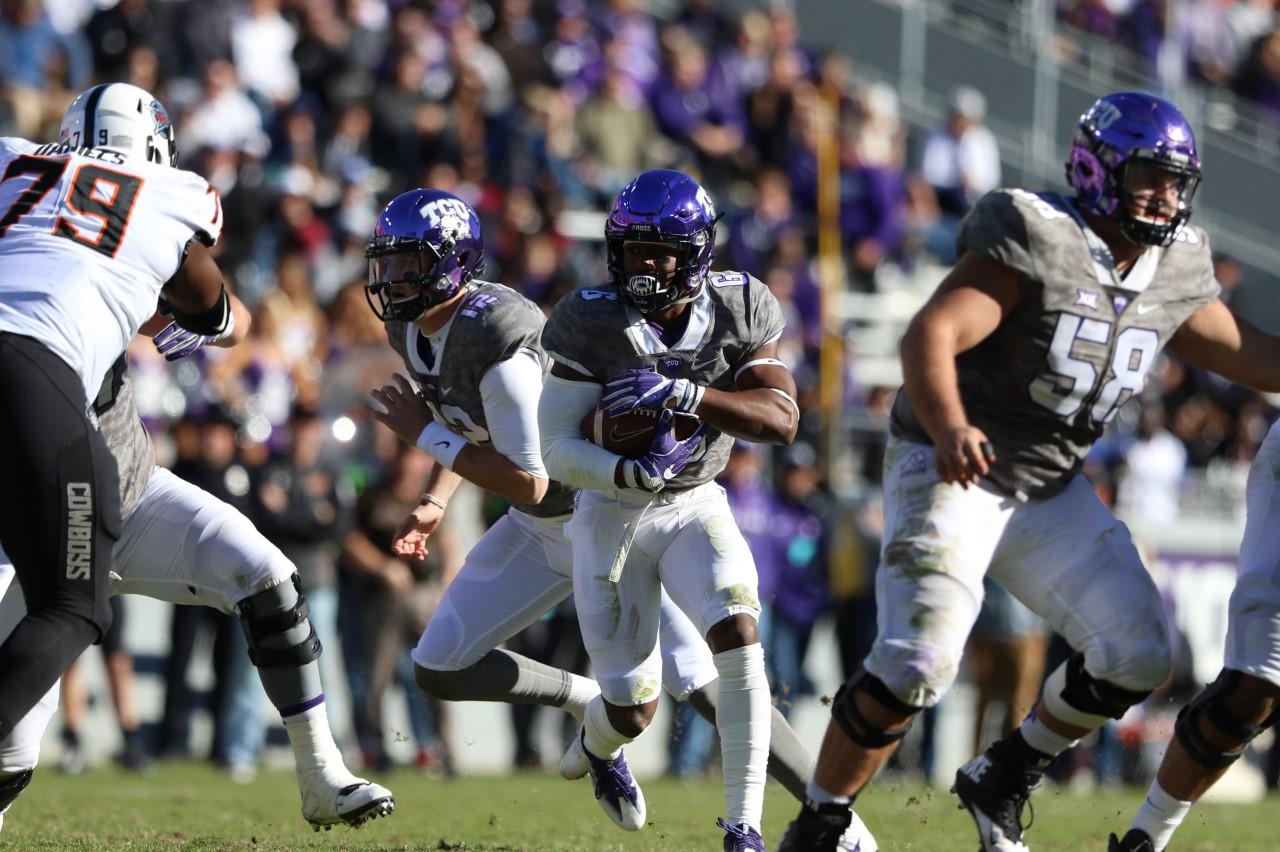 print
Even with bowl eligibility, TCU has a few things to play for Saturday against Kansas State.

The winner will clinch fourth place in the Big 12 Conference. Also, they will likely get a trip to the Texas Bowl in Houston, potentially facing off Texas A&M.

For the graduating seniors, Saturday marks their last game at Amon G. Carter Stadium. Their four years have been noteworthy. They were the first four-year class in the Big 12 era, had a solid 33-16 home record and were the ones who gave TCU its first Big 12 title.

Saturday’s game will also mark something special for Gary Patterson. It will be his 202nd game as head coach. This mark moves him past former head coach Dutch Meyer for the most games coached in TCU history.

“I thought too much was made of my 200th game against Oklahoma State,” Patterson said. “I take a lot of grief and get a lot of praise, and there’s been a lot of people who have had their part in building the blocks of the program.”

TCU leaned on its ground game and defense to take down Texas, and that’s likely the recipe the Horned Frogs will recreate on Saturday. Junior backup running back Trevorris Johnson chipped in 68 yards and a touchdown on 11 carries against the Longhorns, but junior Kyle Hicks will still be the go-to.

“We have one of the better running back groups in not just the Big 12, but in the country,” Patterson said.

Hicks is one of just four players to lead his team in rushing yards – 894 and receptions – 40.

Look for a steady diet of Hicks with a fair amount of Johnson and freshman Darius Anderson mixed in against the Big 12’s top defense. Anderson ran the ball three times against Texas. He totaled 103 yards, including a 70-yard touchdown sprint.

The Wildcats also have a potent running game. They’ve rushed for over 200 yards in each of their last five games, their longest streak since 2003.

“Anytime they have a quarterback who can run the ball, they’re tougher to deal with,” Patterson said.

Expect TCU’s linebacking core to try to limit Kansas State by keeping them out of the end zone.

TCU junior linebacker Travin Howard leads the Big 12 and is fifth nationally in tackles per game at 10.8. Sophomore Ty Summers, reigning Big 12 Defensive Player of the Week, is second in the conference with 10.5.

With a 100 percent chance of rain and an expected high of 50 degrees, Saturday could mark TCU’s first bad weather game of the season.

Patterson’s fine with the weather as long as it comes with a win.

“I’d hate to get that cold and wet and lose,” he said.