Sabrina Harb, TCU senior and founder of TCU a cappella group License to Trill, organized the event in memory of her father, Charlie Harb, who died in 2012 of lung cancer. 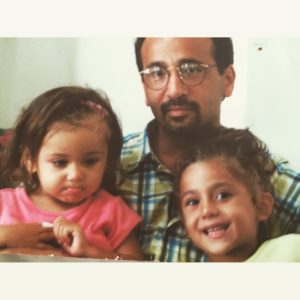 Harb and License to Trill partnered with the lung cancer-focused nonprofit LUNGevity Foundation and hosted a 5K Neon Glow Run.

License to Trill and six other a cappella groups -including Here Comes Treble and the Horned Tones – performed in a free concert in the Brown-Lupton University Union Ballroom.

Harb said License to Trill started out as a way to help her cope with father’s death.

“I didn’t realize singing was important to me until he passed away,” Harb said.

While her father wasn’t a singer himself, he would have loved to see her perform, Harb said.

“My dad was so into coming to every single one of the performances.” Harb said. “Even if I was really bad he would be there.”

Harb designed the group to be philanthropy based. She said she hopes each year the group’s president will pick a charity special to them.

“What’s the good of a singing group if you aren’t going to give back to the community?” Harb said.

According to the American Cancer Society, lung cancer is responsible for 1 in 4 cancer-related deaths. In addition, more people die of lung cancer than colon cancer, breast cancer, and prostate cancers combined.

Harb says she’s learned to not take the small things for granted.

“You don’t really realize how precious life is and how every single thing you do has such a big influence on your life,” Harb said.