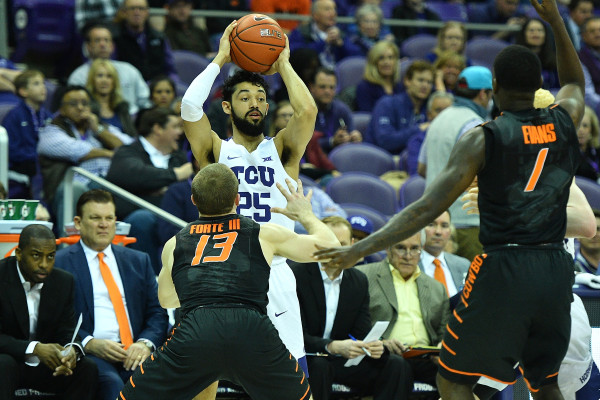 print
In another roller-coaster Big 12 game Wednesday night, TCU couldn’t hang on at the end and dropped a critical home game against Oklahoma State, 71-68.

Even with OSU winning six of their last seven games heading into Wednesday’s game, losing at Schollmaier Arena put TCU back on the NCAA Tournament bubble.

“They’re good, but you have to win home games, even against good teams who are playing well,” TCU head coach Jamie Dixon said.

In the final seconds of the contest, TCU forward Kenrich Williams and TCU guard Alex Robinson Jr. had looks from beyond the three-point line to send the game to overtime, they couldn’t find the bottom of the net.

“I thought it was a good look,” Williams said. “When it left my hands it looked good but it just didn’t fall for me.”

Both Williams and TCU forward JD Miller, who led the Horned Frogs in scoring with 16 points, acknowledged the impact of the loss on their March Madness resume.

“It’s tough because we’re fighting to get in the tournament, and every game from here on out matters,” Williams said.

Williams finished with 12 points and 11 rebounds to record his team-high 10th double-double of the season, tying him with Baylor’s Johnathan Motley and Texas’ Jarrett Allen for the Big 12 lead.

Miller assessed the delicate tightrope TCU is walking by losing games near to the end of the season. “We’re playing to get in the tournament, and we can’t take too many more losses,” Miller said.

Dixon said it was their TCU defense that let them down, as they couldn’t hang onto their three-point lead, 68-65, with 1:30 left to play.

“They had too many driving layups, and we can’t allow a team to shoot 51% and expect to win,” Dixon said. “Disappointing for us because we had the lead down the stretch and didn’t get it done.”

Communication at the end of the shot clock, Dixon said, can remedy their defensive lapses.

However, OSU earned their break at the end of the game, especially Cowboy guard Jawun Evans. Evans scored 27 points in an 89-76 win on Jan. 23 in Stillwater and totaled a double-double of 16 points in 12 assists in their victory over TCU Wednesday.

“When Evans has the ball at the end of the [shot] clock, he’s going to go,” Dixon said. “We have to recognize those situations.”

On the bright side for TCU, senior guard Mike Williams and senior forward Chris Washburn gave the Horned Frogs an efficient lift in their 13 combined minutes at the end of the game Wednesday when TCU retook the lead.

“They bring energy off the bench,” Kenrich Williams said. “Wash got a couple put-backs, and they gave us great minutes.”

As for TCU’s tournament outlook, Dixon speculated on what the Horned Frogs need to do to return to the Big Dance for the first time since 1998.

“You can speculate, generally you would say nine wins, but we have to take care of ourselves because our defense isn’t enough to win against good teams,” Dixon said.

TCU currently sits at six Big 12 wins with five conference games left. The Horned Frogs have Iowa State, Kansas and Oklahoma on the road, while West Virginia and Kansas State are set to visit Schollmaier Arena.

TCU’s next game is Saturday in Ames, Iowa against Iowa State. Tipoff is set for 5 p.m.