TCU 360All TCU. All the time.
90.5 F
Fort Worth
Facebook
Instagram
Twitter
TCU 360All TCU. All the time.
News Storm blows through Fort Worth, thousands lose power
Facebook
Twitter
Linkedin
ReddIt
print
The National Weather Service has confirmed two tornados: one in the Fort Worth, Keller, and Southlake area and another in Lewisville struck early Wednesday morning when a severe thunderstorm blew through the Metroplex.

Wind speeds in Tarrant county were expected to measure in excess of 60 mph, but officials said they reached 83 mph. The highest wind speeds were recorded in Rockwall, reaching 95 mph, according to the weather service’s Fort Worth office.

Oncor Electric reported that over 208,000 customers were without power during the peak of the storm. The company is working to restore power as quickly as possible.

TCU alum and Fort Worth resident, Bryan Thomas, said he was woken up by a phone call from his neighbor around 2:30 a.m. telling him to come outside.

Thomas, who lives on Greene Avenue near campus, said he lost power and several large trees on his street fell.

The majority of the trees fell into the street Thomas said. But one tree broke off about eight feet up the trunk and landed on his garage. Another large branch missed his neighbor’s car by about a foot, he said.

Thomas said his power was restored close to 10:30 a.m. Wednesday and a tree service cleared his yard around 1 p.m..

The TCU Alert system notified students and faculty of the “tornado emergency” just after 2 a.m. Wednesday,  and urged people to stay indoors and away from windows.

For those on campus: Tornado Emergency. Seek indoor shelter away from windows. More updates to follow as available.

Senior nursing major, Olivia Romero, said rain pelting her window woke her up and that the storm seemed to come out of nowhere. For Romero, real concern hit when her apartment at Edge 55 lost power.

Junior interior design major, Sheridan Johnston, lost power in her Skyrock apartment too. She said since the building’s doors are connected to an electronic key pad, the whole thing was a disaster.

Other students were also affected by the early morning storm.

TCU Alert – You can’t even escape it 1000 miles away in New York City when you’re trying to finally go to sleep.

An all clear message was sent by TCU’s alert system just before 2:30 a.m.. 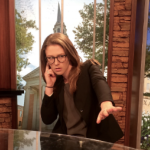