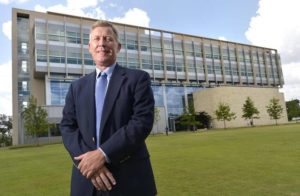 TCU’s planned medical school should be accepting applications in the Fall of 2018 and students are already making plans to apply.

Morgan Williams, a junior biology major in the Class of 2018, said she hopes to claim one of the 20 seats set aside for TCU students.

“It’s an honor to get into any medical school, let alone to be one of the first students in a newly established school,” she said.

Dr. Stuart Flynn, the dean of UNTHSC M.D. school, said he has already made plans for next year’s opening.

“We are admitting 60 students per year,” he said. “We hope for it to grow over the years based on sustainability and excellence.”

Flynn plans on hiring a significant part of the leadership team himself. In five years, the school will have about 700 faculty members, a majority of them being physicians from Tarrant County.

“Our medical students will be taught at the highest level to communicate, which is a big deal,” Flynn said. “We will also have simulation center in which our students will be able to train their procedures before they actually do it on real people.”

The UNTHSC/TCU M.D. school will have classes on both university campuses. However, a large part of the courses will be held in clinical practices.

“The reality of it is Fort Worth will be a medical school,” Flynn said. “We will be a part of the town now, which is going to be great.”

The cost of tuition for the school will be the median of a private school tuition – $50,000 per year, according to Flynn. He said the community and other people will donate and help contribute money to the school in order to give scholarship money to the students.

“I am excited to see the steps and process that the new school will partake in over the next few years,” Williams said. “And, I hope to be a part of it.”