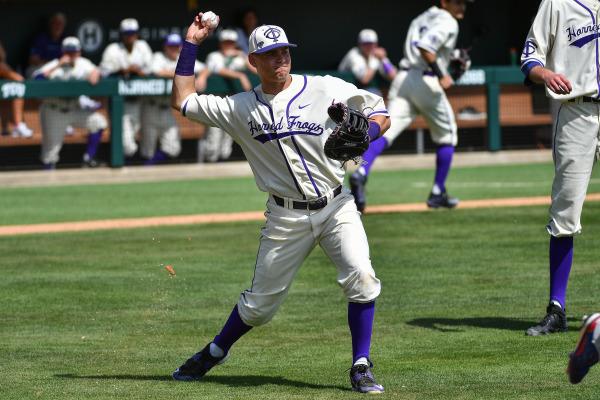 Four walks and a hit batter in the ninth inning doomed the Horned Frogs against West Virginia Sunday, surrendering two runs en route to a 5-4 defeat and 2-1 series loss.

TCU entered the ninth inning leading 4-3, but Durbin Feltman blew his first career save by loading the bases before walking in the tying run. After being pulled in favor of reliever Cal Coughlin, another walk sent the winning run cruising home for the Mountaineers. It was the first loss of Feltman’s career.

The Mountaineers took an early first-inning lead courtesy of a throwing error from Austen Wade, but Luken Baker hit a leadoff single in the second through the left side and was able to advance to second on a wild pitch. Connor Wanhanen dropped a doubled to left field to drive in Baker for a 1-1 ballgame.

A lead-off single in the third followed by doubles from Jackson Kramer and Kyle Davis added two more runs for West Virginia, 3-1, but the Frogs retaliated by bringing in three runs in the fourth.

A pair of singles from Baker and Josh Watson put two on with one out. Nolan Brown doubled to left center and brought Baker home. Watson scored on a wild pitch and Brown advanced the third. Wanhanen’s second hit of the game was a single up the middle as Brown rounded home, giving TCU a 4-3 lead.

TCU had numerous chances to secure their lead but couldn’t come up with the hits. The Frogs had four runners erased on the base paths and stranded 11 more, six of which were in scoring position.

With one out in the ninth, a hit batter followed by three straight walks tied the game for West Virginia. The bases were loaded for the Mountaineers and Darius Hill worked a two-out walk for the walk-off win, handing TCU its first Big 12 series loss of the season.

With the loss, TCU falls to 28-7 overall and 9-3 in Big 12 play. The Frogs take the mound Friday when they host Baylor for a three-game series. First pitch is set for 6:30 p.m. at Lupton Baseball Stadium.