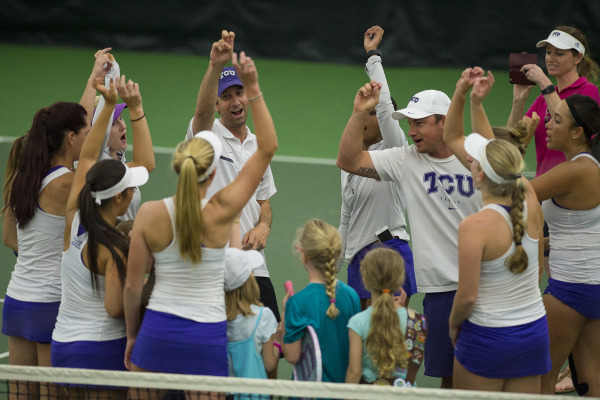 print
The Horned Frogs complete an undefeated weekend after a sweep of the Iowa State Cyclones at the Friedman Tennis Center in Fort Worth, improving to 12-7 on the season and 4-3 in the Big 12.

“Today we played very well,” TCU head coach Lee Walker said. “When you play teams that you expect to win, it’s easy to overlook them, and I thought we acted very professionally today.”

With strong winds on the day, the match was forced indoors, where the Frogs quickly jumped out to a 1-0 lead, easily capturing the doubles point. The Frogs won the point with a strong performance from the duo of Madison Tedford and Sofiko Kadzhaya, who were the first pair off the court with a 6-3 victory. Seda Arantekin and Marie Norris’ 6-4 win gave TCU the doubles win.

On the pairing of Tedford and Kadzhaya, Coach Walker says the team “trusts them a lot because they’ve had so much success this season.” “We paired them randomly at our home tournament in January and they went undefeated, so we’ve kept them as a possible pair all season.”

TCU’s strong display continued into the singles matches, winning all three points in straight sets. Donika Bashota won her fourth straight match 6-1, 6-0; Sofiko Kadzhaya won 6-1, 6-2; and Marie Norris clinched the match with a 6-0 and 6-2 victory. The Frogs won the first set on four of the five courts in play, and allowed Iowa State to only win three games between four courts.

“It was a confident and dominant performance,” Coach Walker concluded. “We had a great practice yesterday and I think it carried over to today. I am excited about where we are right now.”

The Frogs will complete their home slate of the regular season against Texas Tech on Saturday, April 15 at 1 p.m. This match will serve as senior night for the four seniors- Seda Arantekin, Olaya Garrido-Rivas, Sofiko Kadzhaya, and Caroline Wegner.