TCU alumnus and former Seattle Seahawk Clint Gresham was at the store promoting his new book “Becoming: Loving the Journey to Wholeness,” which came out Oct. 3.

Gresham said it was exciting that GameDay was happening around the same time as his book signing.

“I think that it’s going to bring a whole lot of people in,” Gresham said. “I thought that was a fantastic thing that GameDay was happening.”

Before the Horned Frogs faced off against the Mountaineers, Gresham spent time taking pictures with fans, signing autographs and discussing the content of his book.

Gresham said his book takes the coaching philosophy of the Seattle Seahawks and applies it to everyday life.

“It makes us grittier, makes us more resilient,” Gresham said. “It helps us put our identity in something that can’t be taken away.”

When the book was released, it went out of stock almost immediately due to pre-sales. Gresham said the book’s success comes from people hearing their own voice in the narrative.

Will Sherman, an assistant basketball coach at McMurry University, said it was Gresham’s story as a long snapper that attracted him to the book.

“It’s unique being a long snapper going into the NFL,” Sherman said. “You’re not really the face of anything. You’re just behind the scenes but you’re a part of the team.”

Sherman said Gresham was exactly the type of guy he thought he would be, someone down to earth.

Gresham’s wife, Matti, said they will pushing the book tour hard the next two weeks before beginning to slow down.

The campus store will have autographed copies available for fans who missed the signing. 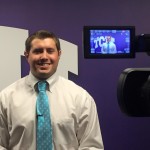