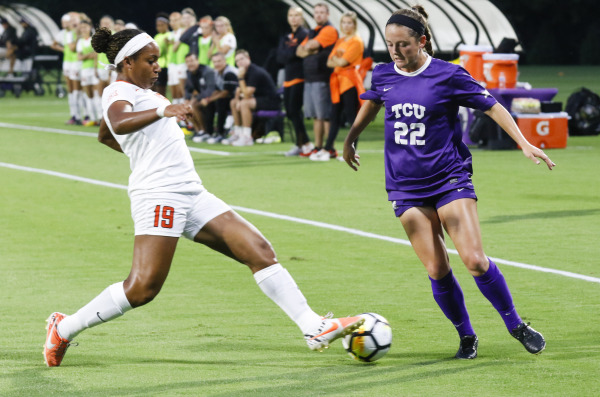 print
From the moment senior forward Emma Heckendorn stepped onto TCU’s campus, she immediately felt like the university was the right place for her. She felt home.

“I was originally committed to play at Notre Dame,” Heckendorn said. “Halfway through my senior year, though, their coach resigned. When I started looking for other schools, I didn’t get that special feeling that most people talk about when they find their college until I visited TCU.”

For Heckendorn, the plan head coach Eric Bell had for the future of the team attracted her to TCU.

“I wanted to be a part of something that would change the entire culture at TCU,” Heckendorn said. “I wanted to make it a much more competitive environment and contribute to making TCU one of the top programs in the country.”

Bell said that he was lucky Heckedorn chose to become a Horned Frog, and he will always be grateful for the impact she’s had on the team.

“She’s meant a lot in changing a lot of the things we do as a program from 2014 until now,” Bell said. “She’s been a major component here since day one.”

In high school, Heckendorn played on one of the top club teams in the nation, so she was faced immediately with the realization success takes time. Heckendorn has learned to limit her own expectations of herself and to trust Bell’s process.

“I have stupidly high expectations for myself,” Heckendorn said. “I’ve definitely gotten better at being realistic with what I expect from myself on a game-to-game basis. I’ve also improved on handling my frustrations and have learned to play in the moment, enjoy the game and make memories with my teammates.”

Heckendorn made TCU’s record books Sept. 2 by becoming the Frogs’ all-time assist leader. To her, it’s a benchmark she hopes the program will surpass.

“It’s a nice resume booster,” Heckendorn said. “I hope somebody breaks the record because that means we’re improving.”

There are only five more guaranteed games remaining on the Frogs’ schedule. Heckendorn is using this limited time available to the fullest and making her presence known on the rest of her teammates.

“I’m focusing on investing in my teammates and helping younger teammates grow and learn that college doesn’t last forever, and you have to make the most of it while you can,” Heckendorn said. “I want to make the last five games count, make the season as long as we possibly can and extend my soccer career for a couple more weeks. Making memories with my teammates and enjoying it while it happens is the main focus.”

One teammate Heckendorn has influenced is junior forward McKenzie Oliver. She’s experienced Heckendorn’s commitment to the team first-hand and said she admires her as a soccer player and a leader.

After playing with Heckendorn, Oliver has taken many aspects of Heckendorn’s game and social skills and implemented them into her life.

“Since my freshman year, I’ve always looked up to her,” Oliver said. “She has always been right by my side through it all, she’s lead me in a positive way, and she’s taught me many things that I’ve used in my play today.”

Oliver tries to model her game after Heckendorn. As Oliver became accustomed to collegiate soccer, many aspects of the game proved tough for her to comprehend and execute. Oliver said her game improved tremendously when she began reflecting Heckendorn’s ability to take the game slowly, not pass too much, make simple passes, be aggressive and not think too much during play.

Heckendorn’s calmness on the field has inspired Oliver during times of frustration.

“Emma and I are a lot alike,” Oliver said. “We both get very frustrated and are very hard-headed. A lot of times during games where she can tell that I’m frustrated she always talks me through it, which means a lot to me.”

As Heckendorn’s career as a Frog draws to a close, she wants her teammates, fans and family to remember her as a fighter and one who gave her all when she played.

Bell said Heckendorn has altered the trajectory of TCU soccer.

“She’s part of the group that turned this program around,” Bell said. “She rolled up her sleeves every day and went to work, fought through a lot of different injuries that most people do not know about. What we can always count on Emma about is that she’s going to give us an effort that’s commendable for an All-American to give every day. For that, I’m grateful and thankful for her and her impact both on and off the field. She’s an excellent student and does everything the right way off the field.”

Oliver believes that Heckendorn’s leadership is one of her many outstanding qualities that will be greatly missed following her departure from the program.

“She is one of the loudest people on the field,” Oliver said. “She’s very positive with me and with everyone else. She will be remembered as a hard worker, a goal scorer and, most importantly, a leader.”

Heckendorn and the Frogs will return to Garvey-Rosenthal Friday night for a meeting with Oklahoma. Kickoff is set for 7 p.m.