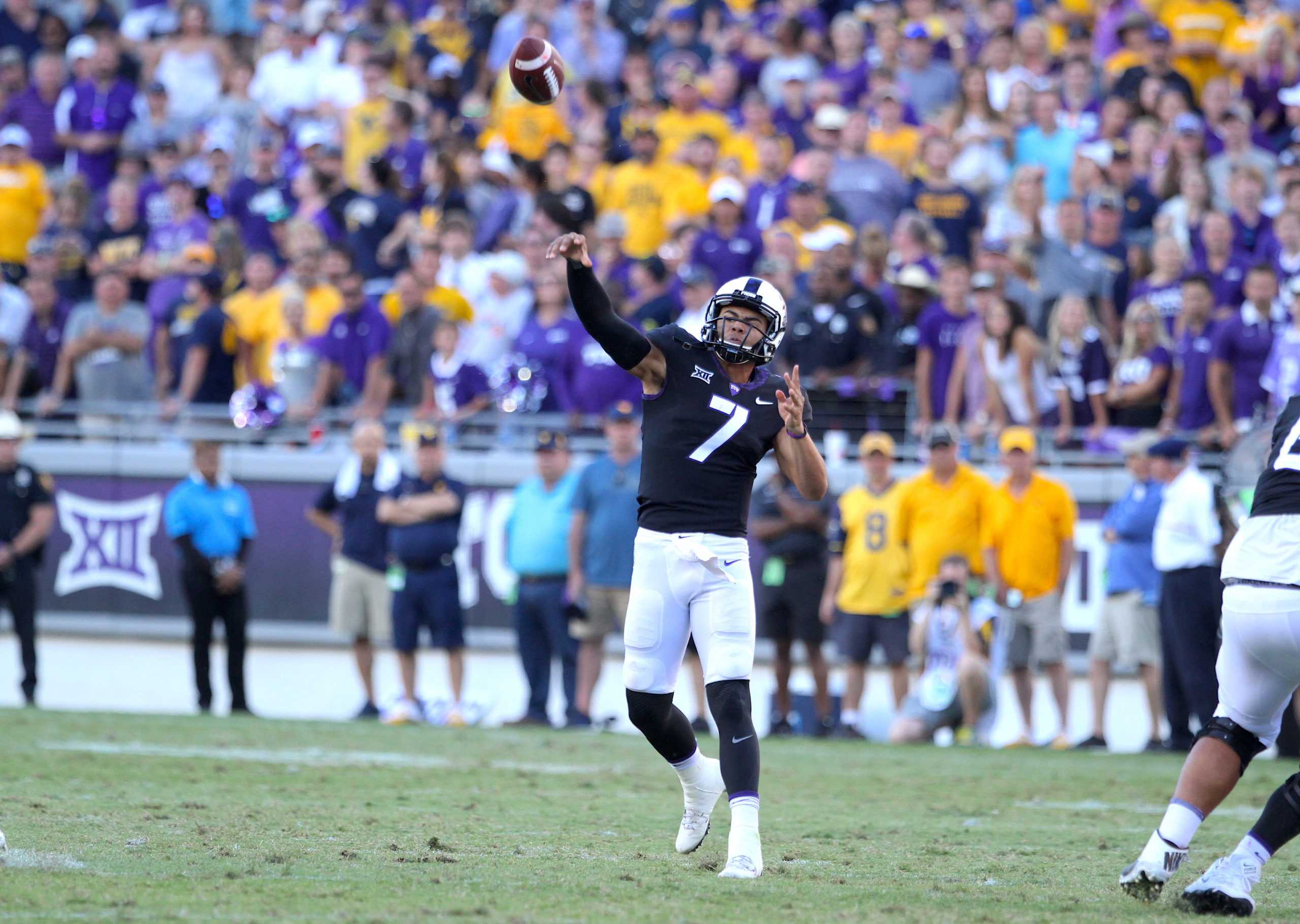 print
The Horned Frogs’ creativity on offense gave them the advantage during TCU’s 31-24 victory over West Virginia Saturday, and now the Horned Frogs are the last undefeated team in the Big 12.

TCU made some game-changing plays on offense like the throwback to quarterback, Kenny Hill, and the “WildFrog,” both plays earning them touchdowns.

TCU head coach Gary Patterson said his offense had to run these plays because West Virginia’s defense is quick to the ball.

“We had the play set up and called; we saw they’re like us on defense,” Patterson said. “We had to throw back into the quarterback because they’re very aggressive.”

In the third quarter, Hill handed the ball off to wide receiver, KaVontae Turpin, and naturally Hill started to jog to the side. Turpin drew the defender’s attention and then threw the ball back to Hill, who was wide open. Hill spun off one West Virginia defender and ran the ball 48 yards for a touchdown. TCU took the lead 24-17 after the trick play.

Hill said he had been practicing the play all week and wanted to get a receiving touchdown.

“I said come to me, if y’all throw this to me, I’m gonna score,” Hill said. “I’m not going to let anyone tackle me on this, but it just worked out we got running touchdowns, receiving, throwing and overall it was a great team effort.”

TCU running back Kyle Hicks said Hill was great during the game.

“Kenny, he balled out today and I was actually happy for him,” Hicks said. “He was always talking in practice how he wants to get a receiving touchdown so I’m glad he finally got it.”

Hill said the coaches trusted him with the ball today, which really helped his confidence.

“It means a lot and gives me a lot of confidence. We try to get it done and we did today,” Hill said.

The momentum-shifting play did not stop the Frogs from making unconventional plays. TCU ran the “Wildfrog” play twice which helped them win the game.

In the beginning of the second quarter, TCU trailed 3-0 until running back Sewo Olonilua took the snap and ran the ball two yards for a touchdown. This put the Horned Frogs on top 7-0.

TCU also ran the “Wildfrog” in the fourth quarter on fourth down with one yard to gain. TCU wide receiver Jalen Reagor rushed for seven yards to the West Virginia 34 on a wide receiver jet sweep, resulting a TCU 1st down. At the end of the drive, TCU scored another touchdown and won the game, 31 to 24.

Hill said he wanted to give Reagor more opportunities to make some plays.

“We came out there and we were like anything you can run by him, just give him a chance, drawback, trust him and just let it go, and he made a play that was big time for us, big time,” Hill said.

The Horned Frogs play next week at Kansas State, and Hicks said they only have one job entering their showdown in Manhattan.

“Our job is to come out here on Saturdays and just compete and come out with a victory,” Hicks said. “Our next goal is six and zero.”