“Male privilege is a myth. Change my mind.”

These were the bold words hanging in front of a campus visitor and an empty chair. Steven Crowder, host of the conservative talk show “Louder with Crowder,” visited TCU with his camera crew challenging students to debate gender, race and America’s culture.

Starting conversations like these was the main goal Matthew VanHyfte, president of TCU’s College Republicans, had in mind when his political organization helped bring Crowder to campus.

“This kind of dialogue doesn’t really exist right now in certain classrooms where we’re supposed to talk about current events,” he said. “At least, when they are going on, it’s really only discussed from one point of view and that, unfortunately, is from the left. Personally, I have no issue with professors leaning to one way or the other. All I care is that if they choose to be biased … I ask them to introduce both sides.” 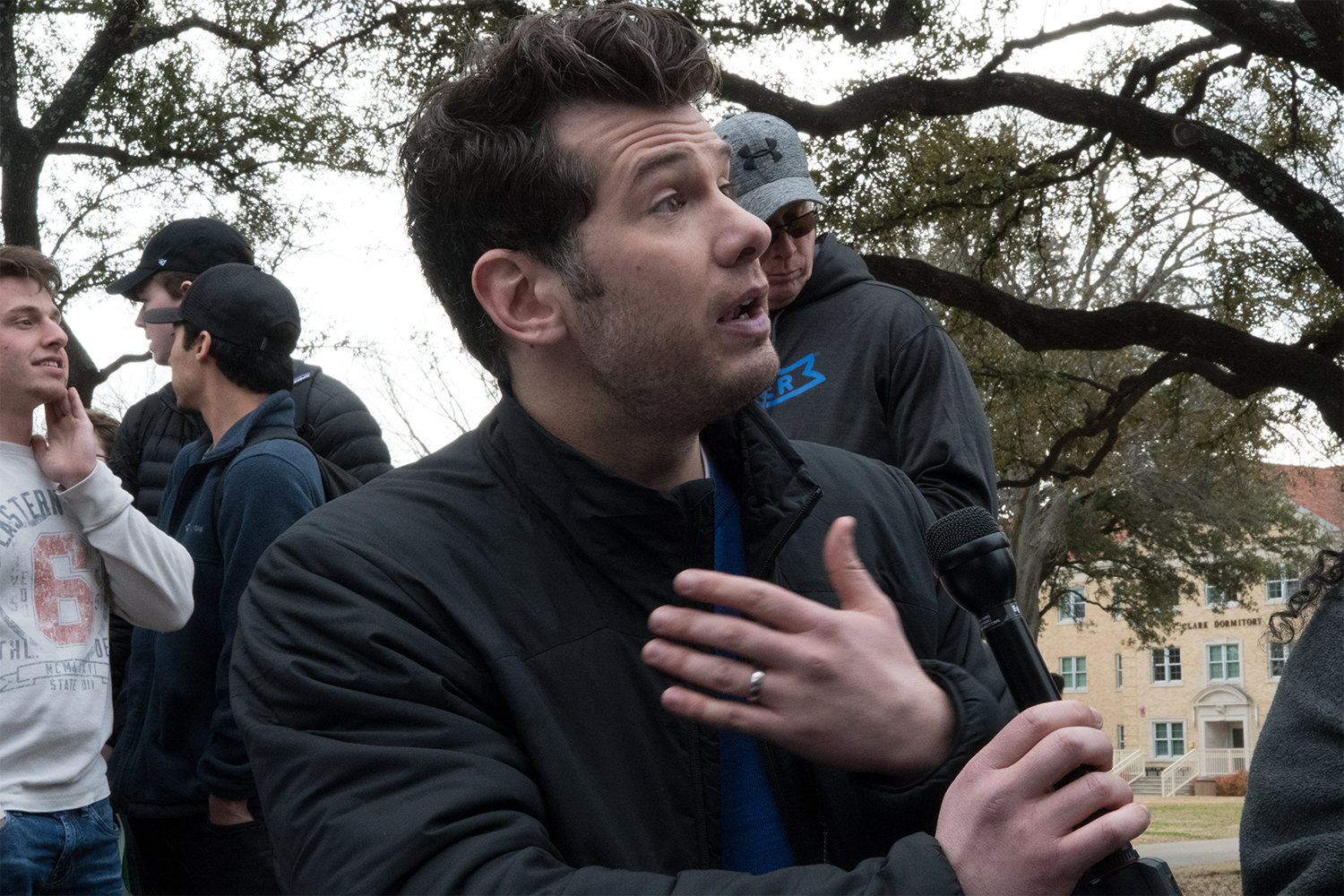 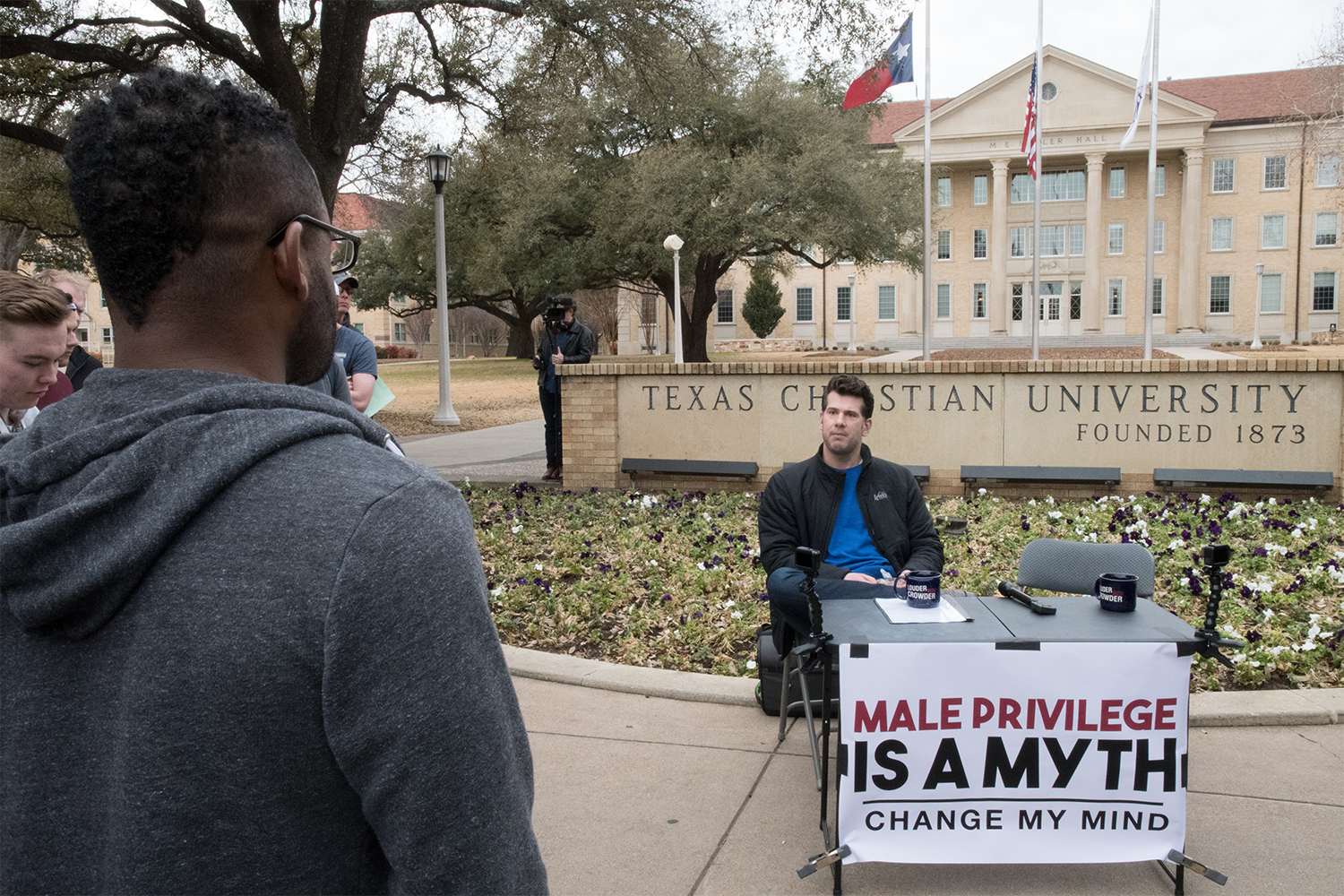 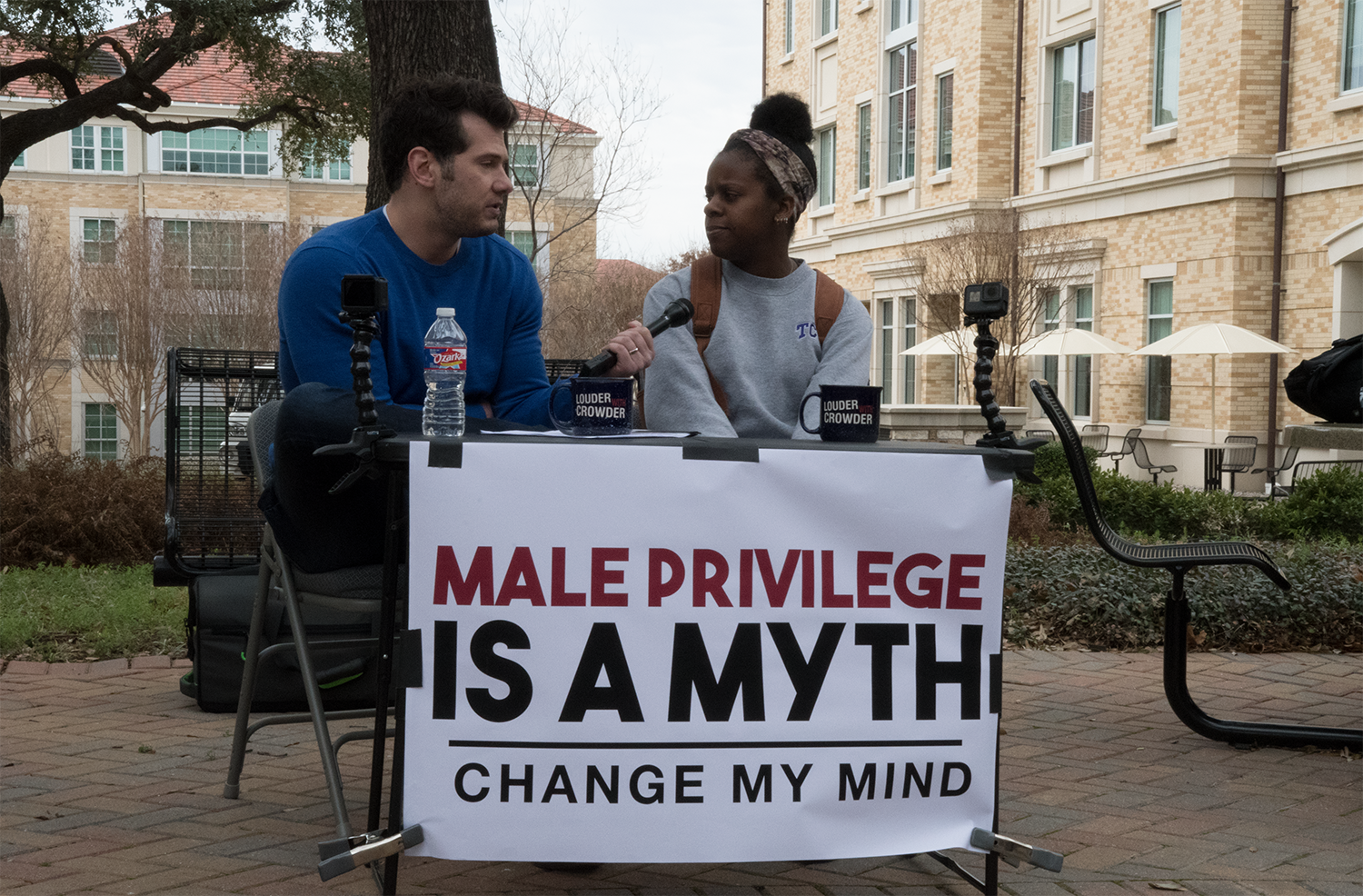 Conversations varied from quiet discussions to heated confrontations. One of which focused on rape culture.

One TCU student, who later asked not to be named because of threatening reactions, asserted that rape culture is prevalent at TCU and delivered an emotional anecdote about one of his female friends who was raped by a fraternity pledge member. The student said that even though the case was reported to the police, campus officials didn’t punish him beyond making him switch residence halls and his fraternity brothers harassed the woman for speaking out.

The student said there’s a “big, systemic sexual assault-rape problem on this campus” and used strong language against Crowder when he refuted that claim and pressured him to offer proof that his friend had been raped.

“When you say men get away with it, we allow them to get off scot-free, it’s not true and you absolve people of personal responsibility and leads to a worse society,” Crowder argued back.

Preston Hughes, the student government association 2020 representative, also talked about the rape culture on campus. He said he doesn’t believe rape is “an accepted phenomenon” at TCU, but it’s important to talk about it and take actions to educate students and make them comfortable coming forward if they’re attacked.

The student who asked not to be named and refused to shake Crowder’s hand at the end of their discussion, said he felt “disheartened” by their debate.

While he left frustrated, others had friendly discussions and most audience members routinely cheered for the web star’s viewpoints and witty humor. VanHyfte said Crowder’s personality is appealing to young people and helps draw millenials toward Republican principles.

Shanel Alexander, a senior political science major, spoke with Crowder about inequalities she experiences as a woman. For example, she said women are more likely to be sexually assaulted or catcalled than men and that male sports are more valued at a higher level than female ones.

Crowder disagreed, saying males have a greater chance to be victimized by violent crime and that women have different advantages like being more likely to avoid speeding tickets and succeed in public school. He said men and women are afforded the same opportunities and told Alexander that she’s able to control her own destiny.

Alexander said she left knowing neither of them would change their minds, but acknowledged that it’s important to talk about these issues.

Two female students talked about race with Crowder and cited cases of black men killed by white police officers as evidence of systematic racism in the country and provided statistics from the NAACP. He fired back referring to data on his website that indicates white men are more likely to be shot by police.

They also questioned his stance that minority-exclusive scholarships are “discriminatory, by definition” saying that minorities need these advantages to have a fair chance at an education.

One of the students challenged the authenticity of Crowder’s viewpoints by saying his “white opinion of racism” isn’t valid, which elicited boos from several students in the crowd.

He admonished that comment, saying that dismissing someone based on their race is the “least effective way to change someone’s mind” and noted that he would never be able to say the same thing to a minority as a white man.

While Crowder continued to invite more students to converse with him, Associate Director of Women and Gender Studies Nino Testa encouraged a smaller group of spectators to split from Crowder’s gathering and form a separate discussion circle. This ring expanded throughout the hour and sparked aggressive arguments about the pay gap and rape culture.

As the event finish, VanHyfte said he was glad students engaged each other on these topics.

“It started a very necessary set of dialogues that I think the student body needed,” he said.

Crowder and Testa declined requests for an interview.

CORRECTION: This article has been updated to correct Steven Crowder’s name.