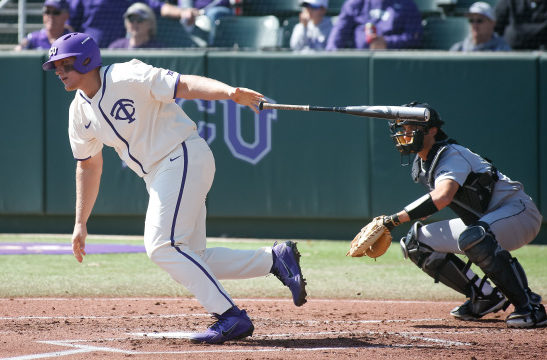 In Saturday’s doubleheader, No. 3 TCU avenged a 3-2 loss in game one against Long Beach with an 8-3 victory in game two, with four Horned Frogs registering multi-hit games and Michael Landestoy tallying three RBIs.

TCU loaded the bases and took advantage in the bottom of the first inning to open up a 2-0 lead. Connor Wanhanen’s hit into left field started a parade of baserunners that included Josh Watson, Michael Landestoy and Luken Baker. Wanhanen and Baker scored the first two runs.

Nick Lodolo started on the mound and allowed three runs on three hits in six innings of play. He fanned six and did not walk a batter.

Tristan Hanoian marked his first career hit in the bottom of the second, which turned into another run as he scored on a two-out single from Baker.

TCU’s wild pitch on a strikeout gave Long Beach an opportunity to tie the game in the top of the third. Shaq Robinson scored on a throwing error and Long Beach took the lead, 3-2.

The Horned Frogs broke the tie in the bottom of the fifth when Watson scored on Landestoy’s first base hit of the afternoon. A pinch-hit single from Zach Humphreys pushed the lead to 5-3.

TCU first-year pitcher James Notary made his collegiate debut on the mound in the top of the eighth and collected his first career save. He retired six of the seven batters he saw.

Long Beach’s pitching change could not keep TCU from extending their lead with three more runs in the bottom of the eighth. TCU first-year infielder Coby Boulware singled, starting a run of five straight batters to reach base. Boulware scored on Baker’s base hit and A.J. Balta picked up an RBI after being hit by a pitch with the bases loaded, pushing TCU’s lead to 7-3.

Five scoreless innings from the bullpen and five two-out runs secured the series victory for the Horned Frogs Sunday.

The win was the team’s fourth of the season, bringing their record to 4-2.

The Frogs were hot from the start, with freshman Coby Boulware and sophomore Luken Baker opening the game with base hits. Zach Humphreys had the hot bat on Sunday. Humphreys blasted a triple, allowing Boulware and Baker to score and giving TCU a 2-0 lead in the bottom of the first.

In the third inning, starting pitcher Sean Wymer pitched around a lead-off walk and recorded his first strikeout of the game to end the inning with the 2-0 lead intact.

Long Beach State answered in the top of the fourth, putting together a two-out rally to tie the game at 2-2.

The Horned Frogs answered with a two-out rally of their own, as first-year infielder Adam Oviedo gave TCU the lead with a single.

First-year players dominated the game for TCU. Coby Boulware added another two-out single to restore TCU’s two-run lead, making the game 4-2 in the bottom of the fourth.

To end the sixth inning, TCU added another run on a bases-loaded wild pitch to push their lead to 3.

The Frogs will take the field again in Arlington, Texas against UT-Arlington Tuesday, Feb. 27 at 6:30 p.m.